After a week in Shanghai, it was time to take high-speed rail 700 miles south for some fun in the sun of Xiamen.

Xiamen is a great little town. And by little town I mean city of 3.5 million. By accident’s sake, I avoided the bustling downtown area, staying at a hostel on a steep, winding side street in a quiet neighborhood near the university. The sense of space and the comparative warmth were exactly what I needed after the overload of Shanghai.

The locals of Xiamen were friendlier than those of Shanghai (not a high bar), and in my experience so were the hostellers. I grabbed breakfast with two travelers: Echo from Guangzhou, China’s third largest city, just around the corner from Xiamen (14 hours by train) and Steve, a Brit studying in Tianjin, who had already been in Xiamen a few days. Steve had taught English in Tianjin for a year but quit to study Chinese full-time.

We decided on a bakery of sorts, and I snacked on nai huang bao, literally, “yellow milk bread” as Echo explained, a delicious sugary dough filled with gooey egg yolk.

Xiamen is itself an island, but one of its biggest tourist attractions is this smaller island off the coast. Steve 2 had already ventured there, so Echo and I set out to take the 8-minute ferry ride across the strait.

The latter means you can aimlessly wander its little windy streets without fear of getting run over, or without getting lost for that matter, since you’re never far from the water. (If you’re wet, you’ve gone too far.)

For me, this was a 180 degree shift from Shanghai. And it helped I had a co-explorer who spoke Chinese. 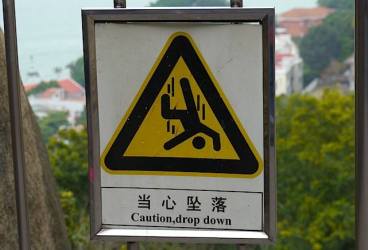 Even though the sun did not come out to greet us, the view from atop Sunlight Rock was well worth the $10 park entrance fee.

My only disappointment was I didn’t see the statue of General Zheng Chenggong, a famous war hero, that my guidebook recommended.

Later, as Echo and I ate lunch, we saw a photo of the statue on the wall in the restaurant. The statue had to be 50-feet tall! How do you hide a 50 foot-tall statue on an island the size of a postage stamp, we wondered.

Just before I took the ferry back (Echo was staying the night on Gulangyu) we decided to take the path east of the ferry dock as far as the bend. As we reached the bend, there was the statue towering above, looking out over the water at Xiamen.

I don’t know how we missed it on the way over. You can see it all the way from Xiamen—but it was a perfect way to end the day.