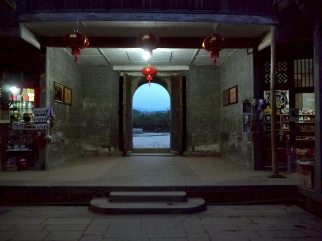 Be careful what you wish for:

I wanted to experience something other than the built-up glitzy shopping mall known as Shanghai. I wanted to get away from the millions of people of the big coastal cities. I wanted some down-time.

I got what I asked for. 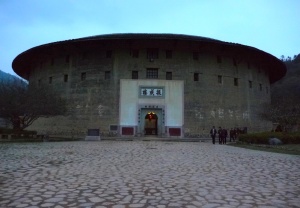 As I write this, I’m sitting in a small ‘bedroom’ inside a Hakka house. “House” is a deceptive word. The houses are gargantuan round communal living facilities built hundreds of years ago by the Hakka people in Southeast China. They’re officially called tulou. The tulou that I’m staying in is easily 100-150 feet in diameter, and my bedroom is on the fourth level. 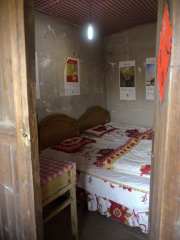 Some of the living quarters during my trip have been sparse, but they are five-star luxury resorts compared to my tulou. Of course there is no tv, no radio, no telephone—I count myself lucky there’s a light bulb. (Lonely Planet said to bring a flashlight.) I’m not sure how well grounded the wiring is—I can see the wires running across the walls—so I’m writing this off battery power to avoid a surge.

There is a fan in the corner—in case it gets too hot I supposed, which in the middle of February trust me is not going to happen. It’s not freezing, but chilly enough for me to predict I will sleep layered in all the clothes I brought with me.

Many tourists complain about the porcelain holes in the ground known as Chinese toilets, but those are state-of-the-art water closets next to my tulou, which boasts a bucket, just outside the door.

I fear it is a communal bucket.

The strange thing is, here I am out in the middle of nowhere—I mean NOWHERE. And somewhere, far in the distance, Chinese pop music is blaring. LOUD. You must be able to hear it for miles. Is there some sort of Hakka rave I wasn’t invited to?

The fancy-schmany Zhencheng tulou down the road

It’s a miracle I got here at all without speaking a word of Chinese. In Xiamen I wouldn’t have known when to get off the city bus from the hostel if I hadn’t seen the bus station out the window. At Xiamen station I bought a ticket for a long-distance bus to Yongding—about a 4-hour drive. I went to the correct gate, and as I was about to get on the bus everyone else was boarding, some random guy pulled me aside, looked at my ticket, and guided me to a bus with one other person on it. The random guy wasn’t in uniform or anything. He was just yelling something to me in Chinese. I got on the bus, but began to worry this is going to be one of those movies where they drive dumb American tourists out to a remote backwoods and release the Gorlax on them.

Eventually more passengers got on at the next stop, and we were on our way to Yongding. More scary than the thought of being driven out to the set of Deliverance was the bus driver’s determination to pass any slow-moving vehicle on the curvy mountain road to Yongding, opposing traffic notwithstanding. Unless said traffic was as large as our bus.

I knew where were on the right path when about three hours out, we passed a few tulou on the way up the road, along with billboards pointing out the soon-to-be-constructed commercial centers in the shape of tulous. Since the tulous gained UNESCO World Heritage status, the area has become a major tourist destination. You can see massive concrete tulou-inspired buildings being erected, also 100-150 feet in diameter, which will put our American teepee motels to shame.

After four hours, the bus pulled off to the side of the road and the random guy who told me to get on the bus in Xiamen, motioned for me to get off. There, waiting on the side of the road, was a guy in a van. Through sign-language the driver established that for about a buck he would take me—I assumed—to the Hakka houses.

We waited there in the van on the side of the road until a second bus pulled up and a couple more Chinese tourists got into the van, one of whom, thank god in heaven above, was from the Netherlands and spoke English. He was able to translate between me and the driver the rules of the tulou—like the 9pm curfew, the intricacies of the bucket, etc. He and his friend, however, decided to stay at a mini-motel across the street because, like sane people, there was no way in hell they were staying in a tulou.

I visited Zhencheng, a larger, more modern tulou, (only 100 years old) about a half-mile down the road before it got dark, and dined on a bowl of chicken noodle soup at a sleepy storefront. I was a little worried about the lettuce in it, about the food in this remote a village, but I could just tell while eating the soup, that if it doesn’t make me sick, it’s going to make me healthy. Afterward I thought maybe I should have skipped dinner altogether because a tulou is the last place on earth you want to have digestive problems.

The tulou is an amazing structure though. Imagine if the pioneers of old taken their wagon circles and built them out of earth, four stories tall. The outside of the tulou is a round fortress, the inside is an open circular courtyard.

The Hakka people still live here, you can see them making their dinners outside, hanging their laundry, as chickens wander around the yard. And unlike the new concrete tolou-inspired centers being built down the road, the real tulous were built with the sturdiness of the pyramids. In a few hundred years, when tourists flock to view the ruins of the concrete commercial tulous down the road, maybe they’ll still be housed in these real ones. 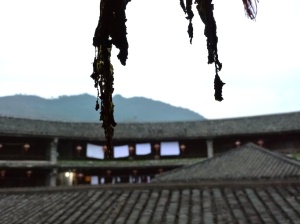 The music outside is getting softer as we approach curfew…and now it’s stopped. It’s quiet except for dogs barking.

Sitting in an ancient tulou, writing this on a laptop, I feel a clash of centuries. There is of course no wifi so if you’re reading this, I made it back to civilization. Or it’s the year 2547 and you’re an archaeologist who’s just retrieved a MacBook from a collapsed tulou.

Either way, It’s getting chilly now, so I think I will head beneath the sheets early, and pray to the Gods of Digestion.