Yes, I went with the most obvious pun. But if you pronounce it like “Dolly” no Chinese person will know what you’re talking about. It’s Da Li. 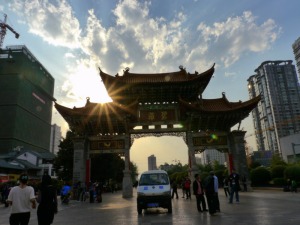 Tam, the Shanghai doctor, said the Stone Forest is nice. But I couldn’t leave Kunming without visiting a series of caves known as the “Underground Forest”.

Others said not to skip the West Hills overlooking the lake south of town.

There was a lot to see in Kunming. The only problem was none of it was in Kunming. Each of these tourist attractions entailed a day trip. So I did the only logical thing. I left Kunming and went to Dali. 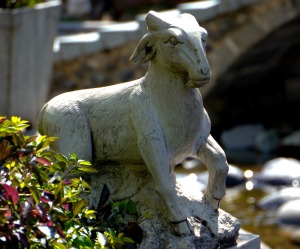 “Big bus or little bus?” was the question posed to me. The big bus to Dali was five kuai (~$1) more.

I chose “big bus”. Best five kuai I ever spent.

This was a bonafide luxury bus. Clean, quiet, roomy. And empty. Almost all the buses I’d traveled on had been full. Apparently very few people choose to (or can afford to) spend the extra $1 to travel in luxury.

There were about a dozen people on the bus, but outside the city the driver stopped to pick up a grandmother, mother, and children along the side of the road. All of a sudden the familiar aspects of bus travel took shape. The screaming kids. The yelling mother. The ever-present hacking up of phlegm. And by the way, if I had to choose one sound to symbolize this vast land it would be just that. Not the ringing of a temple gong. Not the chanting of the monks. Not even the dink-dink-dink of the Hong Kong pedestrian traffic lights. No, it would be the watery gathering of phlegm in the back of the throat followed by the ptuey of saliva being ejected on the pavement.

And to my surprise the Chinese businessman seated across the aisle winced. He was in front of the family. And like the rest of us, he paid an extra five kuai specifically so he wouldn’t have to listen to the hacking of phlegm so prevalent on other buses. It was the first indication that perhaps this was not a universal behavior.

Still, the bus ride was heaven. Our mid-point rest stop was the finest I’d encountered this side of the date line. And the countryside itself was beautiful.

All too soon I found myself in Dali. Not the Old Dali that everyone raves about. The bus drops you off in New Dali, and then you have to take a bus or cab. I had no idea where the bus was, or where I was, so I hailed a tuk-tuk. I thought the little cart’s motor was going to break down on the way up the hill, but we made it to the Bird Bar, a hotel recommended to me. I could not imagine how depressing my stay in Dali would have been had I slept there. 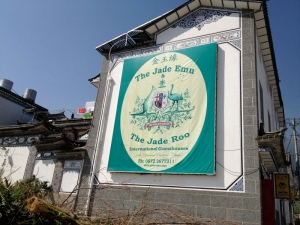 Walking into the courtyard of the Jade Emu, a voice called out to me, “You made it!”

The voice belonged to a total stranger, a French backpacker lounging in the courtyard who had arrived only 15 minutes earlier. But Alain said it with such familiarity that the Israelis he was traveling with assumed he knew me. Which come to think of it may have been why they invited me to dinner.

The room at the Emu was cheaper than the Bird, but bright and airy, with a view of the mountains. The Emu owner was Australian and knew exactly what laowais wanted. Dove Bars at the front desk. Time tables of buses and directions. Dependable wifi. An open courtyard. A shower that functions. English-language TV stations. Not to mention a clean, well-lit room.

All this just outside the beautiful little Old Town section of Dali. It was the first place I felt like home since leaving my own. 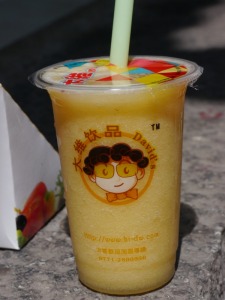 And apparently my brother has opened up a juice store here.