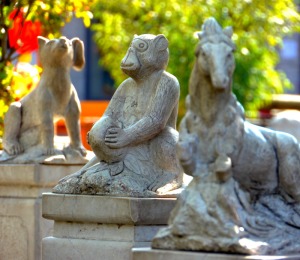 At first I thought Maya and Ezra were a couple because they had recently graduated from the same med school in Israel, and because they acted like a couple. Not the lovey-dovey can’t-keep-my-hands-off-you kind, but the been-married-for-forty-years-and-argue-about-directions kind. It turns out they didn’t know each other back home. But they had a mutual friend who suggested they meet up since they’d be vacationing at the same time.

On Tuesday we rented bikes and headed up the shore of Lake Erhai. While stopped for a rest by the mysterious telephone pole in the sea, I mentioned how it reminded me of the Salton Sea in California, the world’s largest accidentally man-made lake. We got on the subject of Los Angeles and California, about which Ezra knew very little compared to Maya, and she reminded him of it.

(I should point out Maya’s English was flawless, and she spoke with an American accent. When I met her, I had asked where in the U.S. she had lived. She hadn’t. She had just watched a lot of American movies and tv.)

Well, Ezra wasn’t having any of it. He’s Israeli, he argued, how and why should he know about L.A. or California?
“It’s common sense,” Maya began, “It’s been in so many movies, so many tv shows—”
“So now how much tv you watch determines common sense?” he countered.
And so on…

Continuing up the path, we ran into an actual couple, Benny and Olga, who were also staying at the Emu. I didn’t know it yet, but I would spend much of the next three weeks with them. The five of us rested up by the lake, facing up to the realization we had to bike back the exact same distance.

Benny and Olga headed out first. We caught up with them at a little heaven-sent outdoor barbecue on shore of the lake and talked about our experiences getting to Dali. Four of us had taken the Kunming-to-Dali luxury bus and agreed it was the best bus ride in China. Maya had a miserable experience taking the “little bus” for 5 kuai less.

“Why didn’t you take the good bus?” asked Ezra.
“They didn’t say good bus or bad bus,”she explained, “They said big bus or little bus! And one was less expensive.”
That would be, I pointed out, an example of common sense.

Again, Benny and Olga headed back first. The three us of followed, but never caught up. Benny later showed me a picture that revealed the secret of their lightning fast abilities. They loaded their bikes in the back of a local’s truck and he drove them to Dali. Which in retrospect, might not have been a bad idea.

Maya was sick, I hurt my ankle, and Ezra was tired. And the next day we were bound for Lijiang to prepare for Tiger Leaping Gorge. I was glad I met up with Maya and Ezra because they seemed like the perfect companions for the world-famous two-day trek, but in the end only one of us would hike it.