Alain (the “You made it!” Frenchman) had left for Tiger Leaping Gorge the day before.
Maya, with her fear of heights, decided not to go at all.
Ezra doubted he could find food and lodging to meet his picky eating and sleeping requirements.
After all I’d heard about TLG, the last thing I wanted to do was hike it alone.

The author at Tiger Leaping Gorge

“Normally when you go traveling you meet Germans,” I told Jorieke at Mama Naxi’s the night before, “But in this part of China, there are hardly any Germans, only Dutch people.”
“Mountains,” she said, “We have no mountains in Holland.”
A discussion erupted among the three Dutchies at our table: Jorieke, Marieka, and Laura. Apparently, Holland did in fact have one mountain.
“Where is it?” asked Maya.
Silence. Followed by another heated discussion among the Dutch.
Maya interjected, “If you only had one mountain, you’d think you’d know where it was…”

The Dutch may not know where their mountain is, but they no where to find them: China. 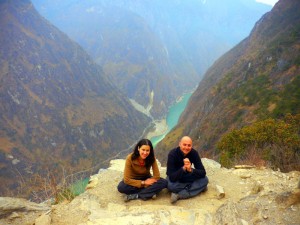 Benny and Olga stop to meditate. Or pray? "Please let us make it!"

Sure enough, half our TLG companions would be Dutch: Marieke, Laura, and a young couple from Holland. Rounding out the group were Benny and Olga from Israel, and a Canadian named Jeff.

The bus driver dropped us off at the starting point near Jane’s Guesthouse, but when we started to remove our big backpacks, he stopped us, explaining he’d take our luggage to Tina’s Guesthouse located at the end of the hike.

Thus, we bid farewell to all our worldly possessions, trusting the driver not to hightail it to Myanmar with my macbook. We prayed we would indeed find our stuff at the end of the trail and wondered, would there be any more surprises along the way? 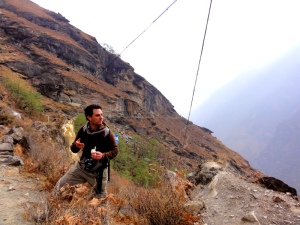 I had heard a lot of things about TLG—the narrow trail, the precipitous cliffs, the donkey poop—but I’d never heard about anyone getting lost. It wasn’t even in the cards. This is one of the most famous hikes in China. It’s well marked and probably loaded with tourists.

Following a paved trail up the mountain, we passed a little shack along the way. On its wall, a painted poem implored trekkers to stop in for food and rest. Food and rest! We’ve only begun, we thought, and continued up the hill. Only Laura and Marieke, who were already well behind at this point, decided to stop and repack their day packs. They never caught up with the rest of us. Odd, we thought.

Forty-five minutes into the hike we encountered a fork in the road and a lost French couple. After choosing one way and trekking a bit more, a call to Jane’s Guesthouse revealed we had made the wrong turn—not at the fork in the road, but at the little shack at the beginning by the shack. Instead of taking the paved road, we were supposed to veer onto a little dirt path.

Tea-Horse Guesthouse where we stopped for the night

Reading the poem on the side of the shack, none of us had seen the arrows next to it. (In fact, you can’t see them unless you turn around and look backward.) The only ones who did, we later learned, were Laura and Marieke who noticed them when they exited the shack. By that time, the rest of us were out of sight.

The remaining six of us hijacked a passing minivan and paid the driver to take us back to the shack. By the time we got to the breakfast guesthouse, it was lunch.

I was not brave enough to sample the Fried Wushnows.

It made us feel a little better that half of all the hikers we met thereafter had also gotten lost. (In fact, after lunch we even found Baen from Mama Naxi’s wandering around lost, and all too happy to join our caravan.) I told myself when this was over I would go back and spray-paint “You’re Going the Wrong Way!” on the paved road.

Next came the toughest part, the infamous section called The 28 Bends, which consists of, you guessed it, 39 bends. There’s nothing worse than getting to the 28th bend of something called 28 Bends, and finding you can’t see the end. Whoever counted needs to update their abacus.

That said, it was all worth it.

When we finally reached Tea-Horse Guesthouse at the highpoint of the trail, the Dutch girls were casually waiting for us, sipping their martinis. Okay, there were no martinis, but I believe there were olives in their tea.

Pictures can't convey the size of these mountains. Keep in mind these posts are pointing straight up.

The next day, we stuck together. (Or at least we stuck by the Dutch girls.)