One of the most eviscerating, all-out, no-holds-barred duels to the death I had encountered on wikitravel.org described the path to Walnut Garden. Some viewed the path as essential, others, skippable. Of course you can’t see the individual edits so the article reads like a writer with multiple personality disorder.

The path cost an extra 10 kuai (as opposed hiking straight back the way you came) but we found the fee was worth it. The path followed the river, and at one point the trail was carved into the sheer cliff such that your head nearly scraped the rock above you.

While underneath tons of solid rock, we heard a thundering boom. Either this was the loudest thunder I’d ever heard, or they were dynamiting the cliff above us. Either way, we thought it wise to hasten our pace. 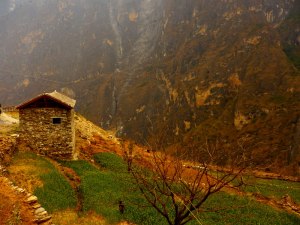 At Walnut Garden (aka Walnut Grove), a villager led us to “Chateau de Woody”. We had no reservations, but our group comprise five of the chateau’s seven guests.

The view from the terrace more than made up for the lack of steady lighting in the rooms—although the latter did make it challenging to shower. And after a two-day hike through Tiger Leaping Gorge, showering was the first priority after breathing.

After savoring a sumptuous dinner on the patio overlooking the gorge, we depleted the chateau of its entire wine supply—two bottles of a liquid tasting conspicuously similar to fruit juice—and collapsed. 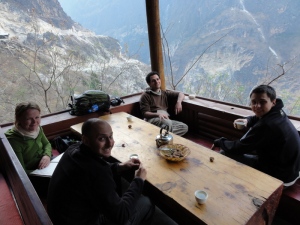 Dinner on the terrace

We discussed whether we would ever hike Tiger Leaping Gorge again. There was no doubt in my mind…

Hell no. It was about as challenging a hike as I’ve ever taken.

And yet just a month later, when a friend was heading there from Lijiang I was sorely tempted to join her and relive the TLG experience.

It was an amazing couple of days, and at some point, after recovering some more, who knows.

But one thing’s for certain, I’m leaving the tripod at home.

The next day there would be no more ups, no downs…merely a three-hour taxi ride to a mystical land called Shangri-La.

On the main road back to Tina's