There was a gap in the wall behind my bed. You couldn’t see into the other room, but every sound from it ricocheted to my pillow.

An angry woman was yelling in Chinese. And then I heard another voice: Marieke. Marieke spoke no Chinese and was earnestly trying to understand what grave sin she had committed to anger this woman.

I should point out that Marieke was about the sweetest, most open-hearted person you could imagine. She showed me her passport photo once; I didn’t recognize her because she wasn’t smiling.

After several minutes of this, Marieke understood what the problem was, and she made amends. Afterward she asked the woman, sincerely, in her Dutch accent, “Ok, is that better? Are we friends again?”

Crisis averted, they were friends once more.

It was interesting hearing the conversation as an uninvolved spectator, because in China I am on Marieke’s end of that conversation nearly every day.

As I would be the next day when trying to leave Shangri-La.

I went to the station to find out the times for the bus. The clock behind the teller said 1:10pm. I bought a ticket for the following 2:00pm bus. Fifty minutes. Plenty of time to get to the Old Town and back.

Inexplicably, on the way to the hostel, twenty minutes had passed in what seemed like five. I didn’t arrive back at the bus station until 2:05 and missed my bus. A nice, Tibetan man with a goofy but well-meaning grin guided me back to the teller, who was not Tibetan.

One way a teller might react to my tardiness would be, “I’m sorry you missed your bus. You will need to purchase another ticket.” Instead, the teller lit into me with a fury of vengeance that could only mean, “Because of you, the bus was delayed four minutes. All of transportation in China has come to a complete halt and our entire economy is on the verge of collapse.”

And I realized I was on the other end of Marieke’s conversation from last night. I have no idea what this angry woman is telling me, but she is standing between me and a bus out of Shangri-La. Meanwhile, the mild-mannered Tibetan man is still beside me, managing an apologetic grin and shrugging, as if to say the local equivalent of “c’est la vie, bro.” A clash of cultures right here at the Shangri-La bus station.

And as I’m listening to the teller’s tirade, my hair blown back by the wrath, I look on the clock behind her and realize why I was five minutes late. Because the clock behind her, the one everyone looks at when buying their tickets, is 15 minutes slow.

I point out the clock to her. Never mind the clock, she gestures, and takes out her cell phone: this is the correct time.

And I kind of understood what Alain meant when he said he hadn’t found what he was looking for here.

I had to purchase a second ticket, no refund, no discount. But another 60 yuan was a small price to pay to leave Shangri-La.

I may sound down on Shangri-La, and truth be told, some of our group stayed longer than I did. Of course, those people had stomach sickness and were physically unable to leave.

There were things I loved about it. The nightly dancing in the square, the peaceful attitude of the Tibetans, Sumtseling Monastery…

Perhaps it was the purposeful attempt to sell a city as something it isn’t. Living so close to Hollywood, I shouldn’t throw stones. But one thing I’ll give Hollywood, it never tried to sell itself as a spiritual oasis.

With its kitchy tourist town and barren hills, Shangri-La evoked more a feeling of Wall Drug, South Dakota, than an earthly paradise. And the result of its shiny new name and population boost was that the authentic native population and culture of Zhongdian was being slowly outnumbered and replaced.

Waiting for the next bus out of town I felt like I was in the ubiquitous song Hotel California—“You can check out any time you want, but you can never leave”…

But it was another Eagles’ tune that kept running through my head:

They call it paradise.
I don’t know why.
You call some place paradise,
Kiss it good-bye.
— The Eagles, “The Last Resort” 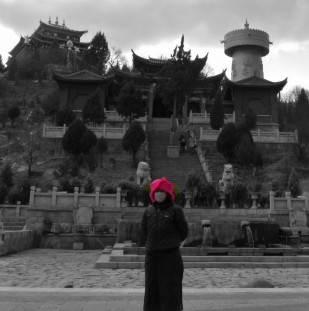