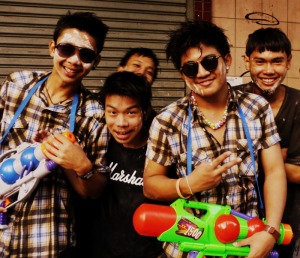 Get Thai’d! You’re talking to a tourist
Whose every move’s among the purist…

One night in Bangkok and the world’s your oyster.
The bars are temples but the pearl’s ain’t free.

—“One Night in Bangkok”, from the musical Chess 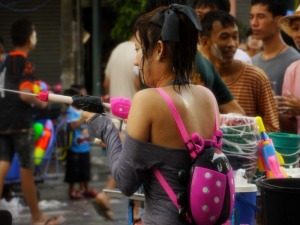 After two months of traveling the mainland, I returned to Shanghai long enough to do my taxes—I left all my paperwork at Alison’s apartment—and to reshuffle my belongings. This time I left my winter jacket behind because it was now April and I was heading to Thailand in the hot season.

Euphoria. My first international flight from the Middle Kingdom landed me in a town called Bangkok. I was worried about arriving in a new country in the middle of the night but compared to China, traveling in Thailand turned out to be easier than navigating my own hometown.

O wonder! How many goodly creatures are there here! How beauteous mankind is!

Much of the difference stems from the language barrier. In China, I’d estimate 95% percent of the tourist industry is domestic. In Thailand however, if you’re a hotel owner or tour guide and don’t speak English, you’re missing out on a huge percentage of your potential customers, and even worse, the ones who will pay more. So everything’s in English. Metro signs, menus…I bought a pdf of the Bangkok chapter from Lonely Planet, just in case, but for the most part found things by asking around. 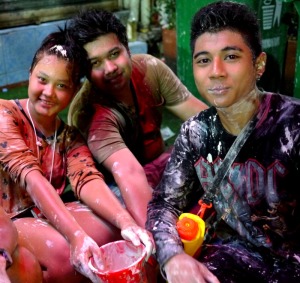 The other advantage is the absence of bureaucracy. Getting my 30-day visa was as easy as filling out a piece of paper when I arrived at the airport. From there I hopped on the metro at almost midnight and in one transfer found myself a few blocks from my hostel.

But no time to rest. I arrived in Bangkok on the eve of Songkran—the Thai New Year.

At one time Songkran was an auspicious and reverent celebration, a time of year when one would visit one’s elders and bless or be blessed with a few drops of water. And in some parts of the country that’s still how it goes. But in Bangkok and Chiang Mai the festivity transformed over the years. Particularly the little water ritual. Now thousands of young people flood the streets, literally FLOOD the streets, with untold gallons of water from water guns, buckets, and any other type of container that can expunge liquid.

And it’s the perfect way to celebrate April in Thailand. It’s the hottest month of the year. The weather was so scorching that being drenched was the only way I could stand being outside in the middle of the afternoon.

The first night I ventured to a street just north of the hostel where the crowd was mostly Thai. In some parts, where traffic was moving but barely, groups would ride in open pickups and water wars erupted between the gangs where the only casualties were soaked clothes and wrinkled raisiny fingers. 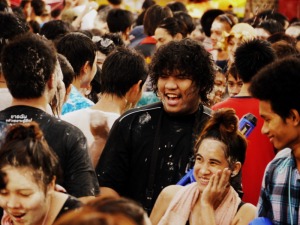 The second day I made for Kho San Road, a hotspot for the Western tourist crowd.

On the way there I watched a bunch of local teens soak a couple of cops on motorcycles. In L.A. you’d get more than water back in your face. But the cops laughed and rode on. Some others soaked a open truck of military personnel. But unfortunately for the attackers, these soldiers were prepared and carried their own weapons—not guns but tubes that they inserted directly into their water bottles—and blasted the kids with ice cold water. 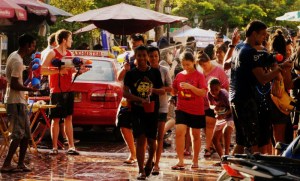 The streets were so packed, it took hours to get to Kho San. At each turn I would ask “Is this Kho San”, only to be told, “No, Kho San is way more crowded than this.” And then I’d arrive at a street so packed full of celebrants and their buckets and water guns that you couldn’t move, that this had to be Kho San. And again I’d be told, “No, this is nothing. Kho San’s way more crowded.”

By the time I reached Kho San it was night. For some reason you couldn’t bring your belt to Kho San Road, so there was a row of countless belts hung up along the side of the entrance. 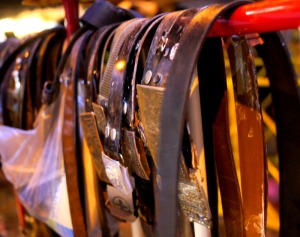 Nor could you bring in the little buckets of chalky paste celebrants use to decorate each other’s faces in other parts of town. There was a mountain of these colored pails at the entrance. 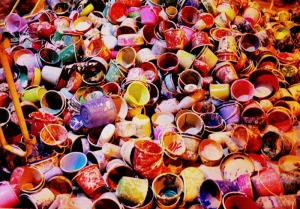 I was warned there was no avoiding getting soaked. I asked a fellow tourist who’d just come through the gauntlet if he thought it would be safe bringing my camera into to the watery battlefield. “It depends,” he said, “Do you want to keep it?”

I brought my camera in and the few photos you see were carefully taken so as not to drench my GH2. I recommend any future celebrants bring a waterproof camera.

Most celebrants wore sealed plastic pouches that hung around their necks in which they carried their money and cell phone. Every few minutes you could count on seeing someone yelling into to a plastic bag that hung from a yarn necklace. 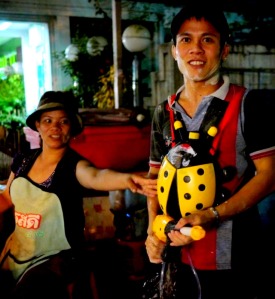 My camera and iPhone survived. My wallet and passport were not so lucky. The money in my wallet dried over the next few days, but I wouldn’t realize the full extend of damage to my passport until six months later when the Chinese embassy refused to give me a new visa on account of the fact the digital strip no longer worked. 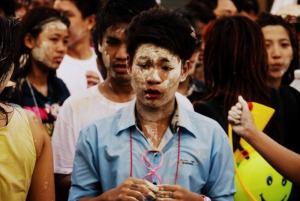 I’d have to rank Songkran as one of my two favorite holidays this year, up there with the Lantern Festival in Taipei. Bangkok during Songkran is crazy and amazing, although I’ve heard Songkran in the northern city of Chiang Mai is ever bigger. Hmmm….I know where I’ll be next April!