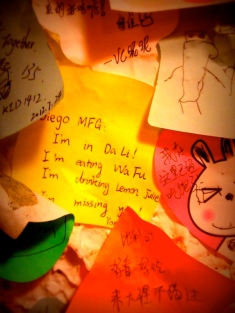 In order to work in China, one must secure what’s known as a “Z” Visa. The first step in attaining this elusive Z-Visa is to find a job.

And, by the way, finding a job is by far—let me repeat that—by faaaaaar—the easiest step.

“You should talk to Reggie.”

The speaker was James from England whom I met in March when I made my first trip through Dali. James was the only familiar figure still there. Most everyone else had moved on to better and brighter things, or—if to Shanghai and Beijing—to busier, hazier things.

Since March I’d explored Yunnan and Sichuan provinces, returned to Shanghai and celebrated Songkran in Thailand. I asked James what he’d been up to in the meantime. He said I was pretty much looking at it. James was a traveling contradiction, adventurous enough to leave a stable job in England and journey halfway around the world to places most of us have never heard of. But once he gets where he’s going, he’s parked. I mean parked. Break out the cinderblocks.

Reggie, meanwhile, proved to be a mercurial figure. Everyone knew him, everyone had seen him recently, but he was never actually around and people were reluctant to describe him as they didn’t want to prejudice my opinion, whatever that meant. I learned that Reggie was American, a nice guy, very friendly, and a man who moved to the beat of an arrhythmic drum.

A few days later I was in the lobby talking with a Finnish girl about the U.S. Republican primary—and was impressed (and depressed) that she knew more about what was going on in the U.S. than I did—when a tall, clean-shaven young man started surfing on the computer. Using my powers of deduction (He was browsing American websites) I realized that this was the legendary Reggie himself.

Like people told me, he was nice, friendly, and easy to get along with. But he had one fatal flaw. Reggie was the loudest person I had ever met. I feared our conversation would wake people on the third floor. It probably did. It was as if he was having a conversation with someone behind me—fifty meters behind me in a cone of silence.

Reggie was from South Carolina and was a self-described “spastic”. His go-to move was to say “ohhh yeah” while rapidly rubbing his left palm between the thumb and forefinger of his right. He had no physical problems though. In fact he had bicycled all the way to Laos one time. Another time, to the border of Burma and back.

Reggie worked for an English school run by a Chinese owner named Sammy. Reggie’s career advice was to head to the Bad Monkey—the Western bar in the center of Old Town—and to get Sammy’s number off the flyer posted on the wall.

And so I began my descent to the land of Apocalypse Z Visa.