Ready or Not, Here We Squat 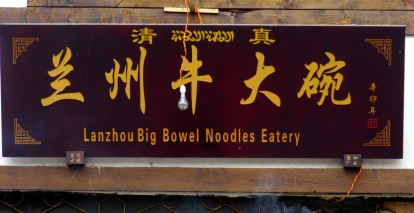 What a difference an ‘e’ makes.

So far I’ve only skirted around the topic that is the elephant in the room when talking about adjusting to life in China. And for good reason. Warning: This is my longest rant yet so before we begin, you may wish to go to the kitchen and stock up on popcorn or snacks or whatnot. But whatever you do, don’t eat it. In fact, don’t eat anything for the twenty-four hour period prior to reading this. Two days would be better. A week is optimal. This post is the blogging equivalent of colon surgery. The cure is worse than the disease. If you have any human sensitivities whatsoever, for the love of God skip this post.

Okay, for those survivors, let’s wade into these septic waters tepidly by saying if there’s one sentence I should be able to write in Chinese by now, it’s:

“Please do not flush toilet paper down the toilet.”

I have seen this sign posted next to nearly every toilet from Xiamen to Xishuangbanna, in Chinese and in English. In private bathrooms and shared. In hostels, hotels, guesthouses. I have seen it beside cutesy little illustrations of toilets vomiting. See, unlike Hong Kong, Taiwan, Macau, Mongolia, Russia, Vietnam, and just about every country and special administrative zone bordering China (I can’t vouch for North Korea), the mainland hasn’t developed a sewage system capable of swallowing toilet paper. Laos—a country of six million that was bombed to oblivion just a generation ago—has been able to accomplish this. But in the second largest economy in the world, creating a toilet that won’t barf up toilet paper at the slightest provocation, along with whatever else it might have ingested over the previous fortnight, that’s not on the docket. I know what you’re thinking. Wait a sec, “toilet paper” has the word toilet right in it. Where would I put used toilet paper if not in the toilet? Answer: the bin. Needless to say, this causes problems, which even without a crystal ball you may already foresee. For one, the bin ain’t pretty. And I can testify from my encounters with unisex bathrooms, it’s not uncommon for women to deal with their monthly cycle using said toilet paper, and less than two hours after the bin’s been changed, it’s starting to look like a medieval torture session gone horribly wrong or a prop from CSI: Gomorrah. Of course, you can always look away. You can’t smell away.

Okay, okay, we’ll slow down. This is getting to be too much, I can tell. So before we get any further, let’s pause a moment to point out the two assumptions I’ve made. Assumption #1 is that you brought toilet paper into the stall with you in the first place. See, unless it’s a private bathroom there’s no paper in the stall. (That solves the clogging problem.) If you’re lucky, there’s a toilet paper dispenser in the communal area by the sinks. And if you’re really lucky, it has paper in it. In which case before entering the stall you’ll need to make an educated guess as to how much paper you’ll require, based on your recent fiber intake and gastronomical history. (Politics be damned, in Chinese bathrooms we’re all liberals; or prepare to expose your overly-conservative ass to the world as you waddle out for more.) In any case, don’t count on a dispenser. Often there’s a woman sitting outside the public restroom collecting your 1 yuan (16 cents) and rewarding you with the ubiquitous packet of Chinese toilet paper that triples as facial tissue and napkins. But play it safe. Carry your own toilet accoutrements at all times and consider the mainland strictly a BYOTP affair. Otherwise at some point you’ll be out several pages of your Lonely Planet (which is where that Tianjin section comes in handy). So let’s say for the sake of argument there is a dispenser outside and it does have toilet paper. Whatever the wisdom for placing this machine outside the stall, the system tends to encourage waste, as the risk-averse user is more likely to err on the side of excess. But they make up for this waste by ensuring that you will almost never find other frivolous products to dispose of. Like soap, or paper towels. Now, I’m not saying that public restrooms in my homeland are the pinnacle of sanitation. But I also know that you can use restrooms in coffee houses, schools, restaurants, the supermarket, and occasionally not suffer PTSD. Before someone calls it out, I’d like to redact my earlier comment about exiting the stall for toilet paper for all the world to see. It implies that there was a modicum of privacy within the stall to begin with. Not the case. Though the Chinese have brought about some of the most profound, paradigm-shifting inventions—including gun powder, paper, printing, and the compass—centuries before the rest of the world, and even though modern Chinese scientists can duplicate the most sophisticated microtechnology through reverse engineering in the time it takes a Western scientist to download an episode of TBBT, the stall door hasn’t caught on yet.

A rare exception. The fancy-schmancy restroom at the Panda Research Center in Chengdu. “We have doors!” (Glass doors.)

Back home, as disgusting and poorly stocked as the public restrooms may be, they usually have stall doors. The doors even have locks. Granted the locks may be more ornamental than functional, or just a big circular hole in the door, but they’re there for reassurance none the less. In public restrooms in China, you might as well be in an aquarium. But don’t worry, the Chinese generally don’t make it a habit of staring at people in the restroom while they conduct their business. Unless of course you happen to be a Westerner, in which case you’re used to being stared at all the time anyway, and really it’s your own fault for coming to China and eating. And so far we haven’t even touched on Assumption #2. You probably imagine our hypothetical defecator sitting there comfortably on a “Western” toilet. This is a ridiculous assumption. Because, nine times out of ten, what makes the Chinese bathroom so unique, so ahead of the curve in that Mies van der Rohe sort of way, is that the toilet is essentially a hole in the ground. A porcelain hole that you can, in theory, flush. Or in the case of a public restroom, a trench that you cannot. 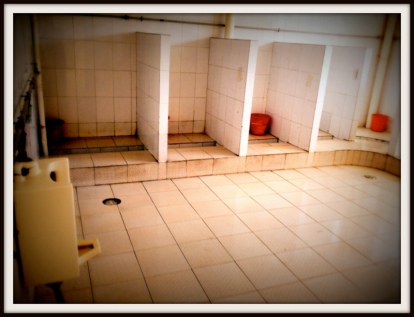 A trench that you cannot. Each cubicle is normally occupied by a squatting Chinese man, pants around his ankles, reading a newspaper and smoking.

I have met a handful of Westerners who say this “squat” toilet is actually preferable to the Occidental throne. I haven’t found any common thread between these Westerners except to say that they are either bat-shit crazy or trying to be hipster ironic. That if you agreed, they would have to do an about-face, or double down and say you don’t get the full effect unless you can squat on one leg like a figure-skater shooting the duck. These red-book-toting contrarians will say the squat toilet is more sanitary. That the Chinese don’t like using Western toilets because you have to sit on the seat whereas on squat toilets you don’t actually touch the toilet with anything but the soles of your shoes.

To which I respond, if the Chinese were that concerned with the sanitary conditions of public restrooms, they would stock them with soap. Or paper towels. Or a functional hand drier. How many people have gotten sick from sitting on a toilet seat as opposed to not washing their hands after using the restroom? No, the squat vs. Western toilet conflict goes beyond sanitation. It is truly the symbolic front line in the clash of two great civilizations. The question is, which toilet will win?

Even in the short time I’ve been here, I can confirm that the Western toilet is increasingly popular in China. More hotels are installing them. Luxury apartment complexes. Train stations and airports. Upscale restaurants and workplaces. In Shanghai and Beijing they’re all over. But could these installations just be to draw in international clientele? Perhaps the trend won’t extend any further than expat and tourist enclaves. If there’s one argument in favor of the domination of the Western toilet, it’s this: FACT: The sit-down toilet is responsible for some of the greatest advances in Western civilization (Seltzer, A., Bismol, P., 2002). From Abraham Lincoln penning the Gettysburg Address on the back cover of AARP in the train loo, to Isaac Newton’s inspiration for the theory of gravity (Not an apple) it is a truth universally acknowledged that the simple act of sitting down alone away from one’s desk while engaged in a physical activity offers a moment of meditative reflection without peer. And if China wants to compete effectively with the rest of the world, it’s got to get up off its ass and, well, sit back down on it. 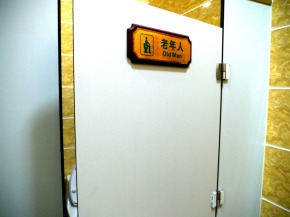 But there’s an equally convincing argument in favor of the porcelain hole. I saw a sign on a Western toilet the other day that was labeled “Old Man”. That’s what China thinks of the West. So weak, even citizens in the prime of life require an Old Man toilet. It’s only a matter of time before all Western civilization topples, its quad muscles too weak to handle even the simplest geopolitical evacuation. China, on the other hand, has no gyms. No one even goes jogging here. Why? Are they out of shape? No, they’re remarkably in shape. The old more so than the young. You pass by farms or road construction on the highway, who’s doing the hardest work? Not buff, tattooed musclemen in yellow hard hats fresh from prison, but real Village People: great-grandma in her peasant garb with little Jojo on her back. While America’s senior citizens are watching reruns of Judge Judy, rural Chinese octogenarians are herding water buffalo across the rice terraces. How is this possible? Because in China the day you wake up and don’t have the strength to squat, it’s over. You might as well cash in your chips and call it quits, you unpatriotic drain on family resources. That’s also why no one diets in China. Here you can’t afford to wait until you’re fat. For one, a fat pedestrian wouldn’t survive a single light cycle crossing a downtown intersection. But more important, if you had to support your weight every time you used the can, you might think twice about super-sizing that tiramisu. (Or maybe not, since you’d have to work off the calories expelling it. Hmm…) Regardless, the Chinese believe mental and physical agility go hand in hand. Both require exertion, the ability to stay on one’s toes. It could be that China’s renaissance is the direct result of its ancient fecal traditions, combined the West’s habit of resting on its gluteus laurelus. So go ahead, West, keep using your sit-down toilet. Make yourself comfortable behind your fancy door that shuts and locks. Wipe yourself with your handy-dandy toilet paper conveniently located right there next to the toilet that you can flush down without even thinking about. Don’t get up, we’ll bring the soap and paper towels. Why exert yourself? We’ll even go to work for you. You stay right there. Relax. Go ahead, check your email. Update your Facebook status. What a pithy tweet! Ha ha. You are so clever. Or face facts and stay competitive by ripping out the porcelain throne, installing a hole in the ground in every home across America, and preparing those quads for the Brave New World Disorder. ‘Cause, ready or not…