Afternoon at the Temple of Heaven

I told my friend Ares in Beijing that the one thing I missed on my first trip that I really wanted to see was the Temple of Heaven.

Hall of Prayer for Good Harvest, Temple of Heaven

It wasn’t until I had left Beijing back in November that I noticed that advertisements and the news media weren’t using the Forbidden City or Tiananmen Square to represent Beijing, but the Temple of Heaven. And more and more, the Temple’s being displayed as a symbol of all China, right up there with the Great Wall and the Terra-cotta Warriors.

So when I arrived in Beijing to meet Ares and his fiancé Nancy for dinner, we popped open the cork of a bottle of red wine, its label showcasing, what else, the Temple of Heaven. 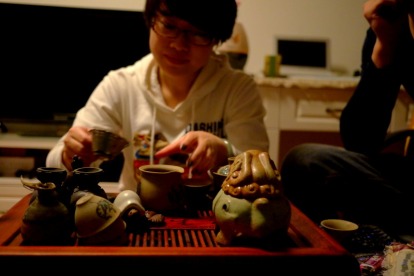 Needless to say, the Temple was first on my agenda.

I entered the Temple complex—the grounds are larger than the Forbidden City—through the East Gate, and sprung for an audio guide. I’ve avoided audio guides on my trip thus far, but it was helpful and informative. The only drawback being that the recordings would start automatically based on your location, and would jump ahead to the following topic if you veered close to the next sensor. There was no way to fast forward or rewind, so I learned to stand completely motionless when the audio guide—we’ll call her Marla—began speaking, for fear of missing out on a crucial element of Chinese dynastic history.

Marla told me about the “Divine Kitchens” and the “Pavilion for Butchering Animals”. According to Marla, ‘butchering’ is a misnomer.

“Animals were hit on the forehead until they passed out. Therefore it is also called the ‘Department for Hitting Livestock’.”

…”built by the Qianlong Emperor during the Qing Dynasty in honor of his mother.” [No comment.]

…The Palace of Abstinence, where the Emperor would fast before the ceremony… 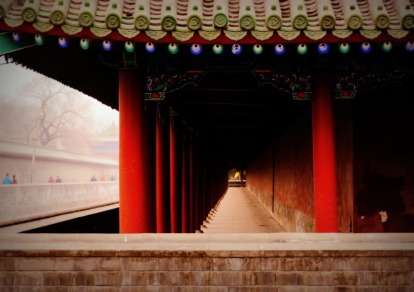 …and, of course, the Imperial Vault of Heaven…

Next, Marla suggested I stride up the Danbi Bridge. As wide as it is, only the Emperor was allowed to traverse it, on his way from the Imperial Vault to the main hall during the solstice ceremonies. Even the highest nobles had to walk on the road below.

Today children play with their toys upon the bridge as mothers take photos with their iPads.

I paused on the other side of the bridge to take in the Imperial Dressing Room, where the Emperor would change clothes before the ceremony. This was the only place in the complex I couldn’t take photos. That sacred? Not exactly. Inside, for a few rmb, the staff will take a picture of your little Emperor or Empress sitting on a replica of the imperial throne.

Finally, the main event. What most people think of when they hear “Temple of Heaven” is actually only a small part of the complex. The cylindrical edifice in all the photos is the temple at the northern edge of the grounds, the Hall of Prayer for Good Harvest.

Hall of Prayer for Good Harvest

An exhibit beside the hall described the ceremonies that took place here. On the solstice, the Emperor would come to the Hall to personally ask the Heavens for a fruitful harvest in the year to come.

I marveled at the amount of energy and resources that went into this ritual. These Emperors and all their subjects pinned their hopes of survival on a bovine sacrifice that would please the gods and regulate the amount of rain and sunshine to grow and replenish their crops.

That evening I tried to stream President Obama’s ‘State of the Union’ address, the one he’d delivered a couple of nights previous on Capitol Hill. But download speeds being what they are in China (glacial—or with anything Youtube related, 0° K) I made do with a transcript, which helpfully included parentheticals delineating when the Congress applauded. (APPLAUSE) It was just like being there.

Today agriculture isn’t the alpha and omega of survival in the coming year. Although last year, with the droughts, it played a large part. Today it’s about the economy in general. So our emperors don’t offer animal sacrifices to the gods. They listen to the advice of economists and historians, investment gurus and politicians, and that’s how we’ve been able to avoid any financial crises in the 21st century.

And I wondered, how different is our system from the Ming and Qing Dynasties? Or for that matter the Zhou of 1000 BC? The tradition of offering sacrifices on the solstice goes back for millennia. By the time of the Ming and Qing Dynasties, it was believed that any deviation from the highly-regimented ritual could spell disaster in the coming year.

As I read over the President’s speech, I also checked out Wikipedia’s description of the protocols of the State of the Union, and saw how these stacked up against the placards at the Hall of Prayer for Good Harvest…

[From Temple of Heaven placards]

Hundreds of Officials to Fast at Their Own Offices

Emperor Go Out of Meridian Gate

At the Midnight to Light the Ceremonial Lamp

Emperor Go to the Sacrificial Alter

To Strike the Bell at Belfry of the Fasting Palace

[From President Obama’s State of the Union Address, February 12, 2013. Disclosure: I’m an Obama supporter and I support more gun control. The following is a juxtaposition of the speech and the placards. It’s not meant to make light of topics discussed in the speech.]

Emperor Go to the Alter to Give a Salute to Heaven

To Perform the Divine Music to Welcome God of Heaven

To Put a Calf on a Fire

To Bury the Sacrifice’s Hair and Blood

To Start Performing the Specific Music

To Offers a Jade to Heaven

The To Offer Silks to Heaven

To Pour Hot Water on the Sacrifices

The First Offer of Wine to Heaven

To Read the Ceremonial Articles

The Second Offer of Wine to Heaven

The Last Offer of Wine to Heaven

To Remove the Sacrificial Offerings

To Take the Sacrificial Offerings to Firewood Stove