It went great for the Zhou for a couple hundred years—for the legacy of the Duke of Zhou and his elder brother’s imperial line. Eventually, though, all good things come to an end. In the Zhou’s case, it was the feudal system. Like the Shang, the Zhou’s empire had grown too large to micromanage. In the beginning they passed out conquered fiefdoms like bouquets to their supporters and family members. Aunt Tilly caught the dukedom of such-and-such. Nephew Bud controlled the north. But you know family. They don’t call, they forget to write. And eventually they forget who’s their daddy.

It didn’t help that King You, last of the Western Zhou, was more interested in amusing his concubines than governing his country.

“The women of the court are getting old,” advised one of his sycophants, “It’s about time we choose some younger ones from the neighboring states.”

King You had neglected his wife in favor of a beautiful young concubine named Bao Si. But try as he might, King You couldn’t get Bao Si, to laugh. One night, just for the hell of it, he lit the beacon tower which signaled to his troops that an attack was underway. When the troops arrived, and no attack was imminent, they were not happy. Bao Si, on the other hand, was over the moon. She thought it was the funniest thing, watching them rush to battle. And to amuse his darling, King You would intermittently ring the alarm, to Bao Si’s delight and the chagrin of his assembling forces.

“There’s no invasion. I’m only Zhou-King!… Get it? Joking? Zhou-King? Hello? Is this thing even on?” — last Western Zhou King

The Zhou King wouldn’t be able to to tell that joke much longer. His father-in-law was a powerful duke. Upset that his daughter the queen had been cast aside in favor of a morose concubine, the duke gathered together other disgruntled northern dukedoms, and one day in 771 BC, invaded King You’s domain. Once again the warning alarms rang, the beacon tower was lit, but this time the weary troops did not heed the call. King You was killed, Bao Si was captured, and the dukes place You’s son Yujiu on the throne. 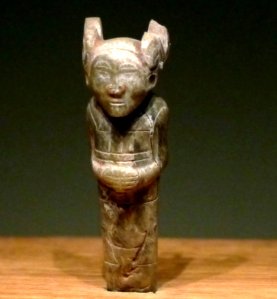 The Zhou dynasty re-established itself in the city the Duke of Zhou built to the east, in Luoyang, but it was never the same after that. The thrill was gone.

Historians calls this post-King-You period the Eastern Zhou, to distinguish it from the “Western” Zhou. During the next five centuries of the Eastern Zhou, the king barely controlled the lands outside his city. As the surrounding states bickered and fought, the Zhou king sat in his palace in Luoyang, and the princes occasionally called on him to settle a dispute or to ask his Guy in the Sky to send them some rain and a healthy crop. After all, though politically impotent, the king was still the closest thing the dukes had to a direct line to Heaven. So the King of Zhou sat on his hollow, hallowed throne for the next 500 years.

File under “You’ll Need to Know This for the Test”
Scholars, being scholars, divide the Eastern Zhou period further into the Spring and Autumn Period and the Warring States Period.
But don’t be too upset at the scholars. It’s their job. And in a few hundred years our friend, the ruler of Qin, will bury them anyway.