Everyone I have ever met, from my first grade teacher to that homeless guy on the Qibao subway, has told me to fly into Shenzhen and take the ferry to Hong Kong. Much cheaper than a direct flight.

So when I got to the Shenzhen airport I inquired about the ferry to HK.
“You want the bus,” I was told.
“No, I want the ferry.”
“No more ferry.”
“When did it stop running?”
“Three years ago.”
Ok, so next time remind me to check how recently my sources traveled to the destination in question.

My first night in Hong Kong
I had dinner at Mr. Wong’s
with two Americans and a Quebecois
named Sean, John, and Antoine.

That was fun to write. And true.

All you can eat, all you can drink for $10, it was a good way to start my Hong Kong trip. And Mr. Wong came up to us and apologized personally that there were no girls there.

Mr. Wong claimed he was half-American, the future half, and expressed a particular fondness for Tennessee.

The Hong Kong hostel—where I met Sean, John and Antoine—was both the most social hostel I stayed at, and the least comfortable. Which come to think of it, may be related.

Sean had been on a business trip in Taiwan the day before, but discovered his visa expired that day. With just hours to spare, he caught the first flight out of the country, which landed him in Hong Kong. John was on vacation. I forget Antoine’s story. (No offense, Tony.) 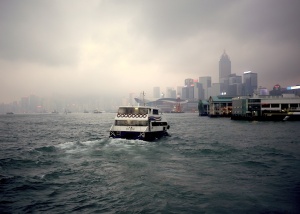 The next morning I ferried to Lamma Island with Sean and a hosteller from Hamburg. We biked around the island on bicycles with brakes loud enough to warn the islanders—and possibly the inhabitants of other islands—of our coming.

Lamma was a beautiful place, though not always the best biking terrain. We were either walking our bikes up steep hills, or riding the glass-shattering brakes downhill. It was a close race, but an American on crutches eventually passed us. (Sadly, I am not making that up.)