My roommate was a Dutch girl named Jorieke. Neither of us had purchased tickets for the observation deck; instead, we trekked up to just below the deck—about a 15 minute walk—to watch the sunrise. It’s hard to believe the deck could have topped the view afforded to us peons… 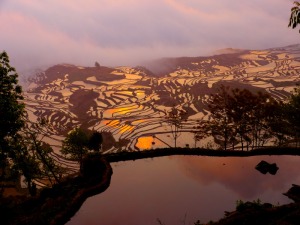 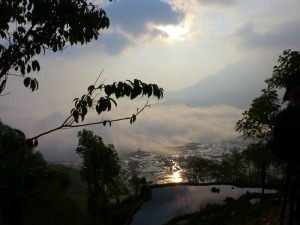 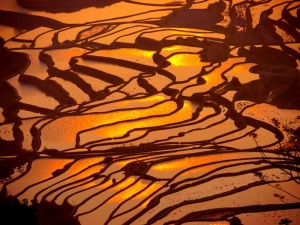 The previous day the Manager of the guesthouse handed me a partial refund and explained in gestures I would have to switch to a ten-bed dorm the second night. I assumed it was a co-ed thing. Maybe the gray-bearded man wasn’t supposed to have checked me into Jorieke’s room. Jorieke had to assure the Manager her feminine vulnerability was not threatened. 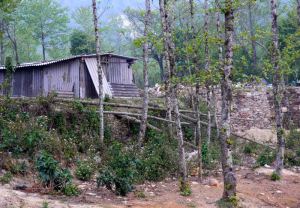 It turned out Jorieke was taking the bus back to Kunming that day anyway, along with several other guests, so that wasn’t the reason. In fact, by a weird coincidence everyone in the hotel was checking out.  Was it something I said? Should have taken that shower in Xinjie after all?

One couple even told me they wanted to spend another night, but were told the guesthouse was full. How can it be full, I thought, if everyone but me is checking out?

I was tempted to take the afternoon bus to Kunming with the others, but with all the trouble of getting to Yuanyang, there was no way in hell I was leaving after one day.

Hiking in the hills

After taking a hike in the hills that afternoon, I returned to the guesthouse to find I was indeed its only remaining guest…