Come sunset I shared a taxi-van to the Bada lookout with a Panamanian art student studying in Beijing. She was doing her thesis on media art and carried four or five film (non-digital) cameras to capture her travels through China. We met her German friend at the lookout. His preferred subject was taking pictures of all the photographers taking pictures. 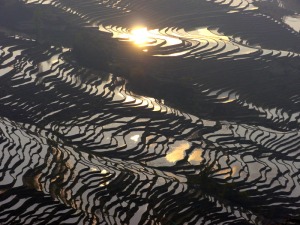 Returning to Sunny’s that evening, I learned why I had been the lone guest.

A group of 32 Malaysian photographers had rented out the entire hotel. The old man who had checked me in for two nights had either forgotten or was unaware.

The photography group kindly invited me to join their impromptu party on the terrace. (Of course, it would have been pretty weird being the only person not invited to the party.) They were all ages, from 10 to 65. Warm and welcoming and full of life and stories. I hadn’t realized English was so widely spoken in Malaysia. The group kept chatting on the terrace until well past my bedtime.

The next morning I hiked up to the observation deck to catch the sunrise, having bought a combo ticket at Bada. Only, I had left the ticket at Sunny’s. I didn’t have time before the sunrise to get the ticket and return, so I just watched from atop the guesthouse roof.

It was a moot point anyway. There was so much fog we couldn’t see a thing.

I felt bad for the Malaysians who by this point had all headed back downstairs.

I figured I would try my hand at time-lapse videography. Seconds after I started recording, the fog cleared, the sun rose, and 32 Malaysian photographers came rushing back up.

The main shot was taken over 90 minutes with a GH2. The second shot was taken with my iPhone, which I just set on the railing a few meters to the left (and prayed the wind didn’t knock it over).