I couldn’t be certain what the Manager was saying to me, but apparently the noon check-out time that had applied to guests up until the previous day did not apply to me.

I packed up my things and caught a ride to a hotel closer to Laohuzui.

At Laohuzui I made the mistake of purchasing a pack of postcards from a Hani girl without haggling. Word got out. The laowai is rich. And dumb. At first I didn’t understand why I was besieged at this otherwise serene lookout point by girls selling their wares and services. (They will carry your backpack for you as you move from lookout point to lookout point. Since you’re carrying your camera, there is nothing in your backpack anyway, but it’s the thought that counts.)

They would not leave, despite my protestations, but continued pleading in Chinese until I moved to a new spot where the same routine would repeat. I took out my postcards to show them, “Look, I already purchased a set of postcards!”

“No,” a Malaysian tourist translated for me, “They have four sets of postcards. She says you don’t have these. ‘More beautiful’.”

“I only wanted one postcard in the first place, not ten, let alone 40,” I tried to explain.

So my pictures are misleading. They don’t capture the full ambiance of Laohuzui, and that’s probably a good thing. 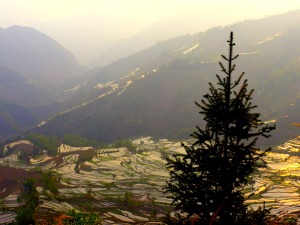 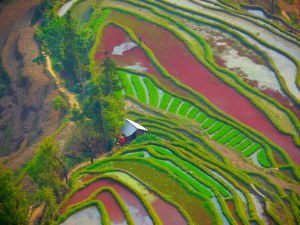 Just another day on the farm

Because I was (I believe) the second hotel’s only occupant as well, the manager gave me a personalized tour of her village.

In the square, young women rehearsed a dance for the following day’s festival. I joined the village’s most prominent family for evening tea. And I almost embarked on an “eel-hunting” trip with a group of boys with pointy sticks, but it involved traversing a swath of mud the width of a balance beam between two bodies of water with a cell phone as a flashlight. As I had my laptop and camera in my bag, I thought it prudent to pass.