You haven’t seen Mount Emei until you’ve seen the view from its peak at dawn. Overlooking a sea of clouds beside a majestic golden temple complex. It is a sunrise which awes the senses. It is a Chinese rite-of-passage. It requires getting up at 3:00 am.

So we made ourselves content with the view at noon instead.

The trail to the top of Mount Emei (or Emeishan) is longer and more strenuous than Tiger Leaping Gorge, so our plan was to take the bus and cable car to the top, then hike the way down. 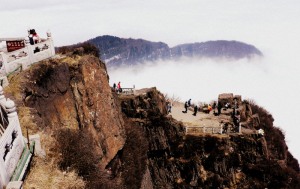 The bus ride up was like going through customs. Halfway up, everybody gets off the bus, buys their tickets, and gets back on. Including the stop, the bus from the bottom took nearly two hours. From the drop-off point, we caught a cable car to top. At 3,000 meters, even the minimal hiking from there took my breath away, and fortunately so did the view. 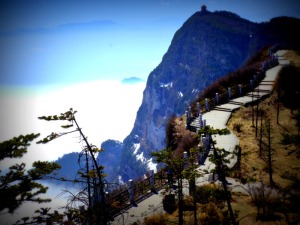 Behold, it was beautiful as they said, even at noon rather than dawn, and made only slightly less spiritually auspicious by the gazillion tourists buzzing about on Qingming holiday. 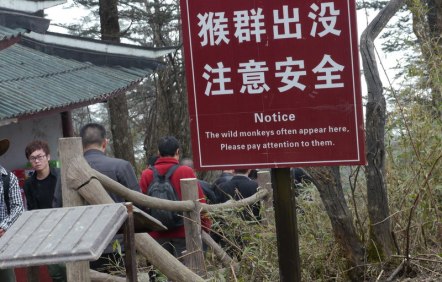 Watch out for attention-whore monkeys.

A gazillion is an exaggeration. Emeishan is one of four sacred Buddhist mountains in China. And China only has 1.3 billion people. So divided by four, carry the one, there were maybe only 333.3 million tourists at most on Mount Emei that Monday afternoon. We took our time exploring the summit, and it was a good thing, because it was all downhill from there. 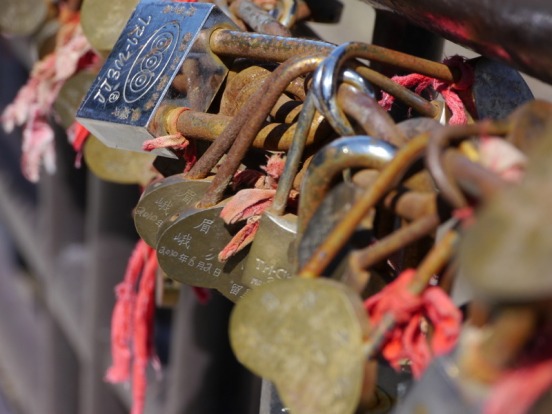 For the first couple of hours, the trail downhill consisted entirely of steps. Icy steps. Icy steps being descended by a line of 333.3 million tourists. It turns out hiking down is only slightly less excruciating than hiking up. By the time we reached the bus stop, Benny’s knee was out of commission, it was getting dark and foggy, and there was snow on the ground.

There I made a brave decision.

I took the bus back down. 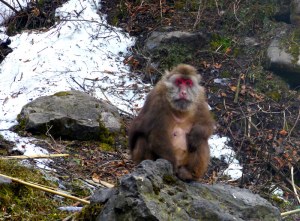 Monkey in snow asks, “You gonna eat that?”

Benny and Olga decided to hike the whole way, and I was relieved a couple of days later to hear they were alive. They had made it down, even with Benny’s busted knee, and even though Benny hadn’t wanted to hike Emeishan at all in the first place.

Benny had predicted his unusual behavior at dinner the night before. He said he hates getting himself into such situations, but if Olga can get him to try it—and she usually does—once there, he can’t quit. 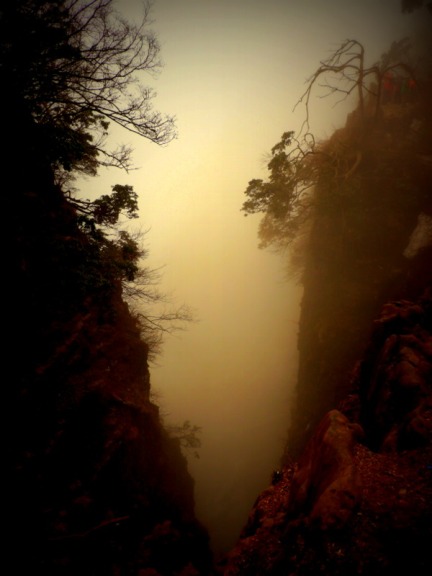 Part of my motivation for bailing was I had reservations about the sleeping arrangements. Or rather, I didn’t have reservations. Trekkers stay at monasteries along the way, but there is no way of booking in advance. This being one of the biggest holidays of the year, I had my doubts about space. And even if you do get a room, there are no showers, and toilet facilities involve garbage bags.

When I arrived in town, I should have stayed, gotten a good night’s sleep, and left in the morning. Instead I hopped on the first bus straight to Chengdu, caught a ride on the back of a suicidal driver’s scooter, and arrived at my hostel to find it was completely booked.

Just in case you felt suicidal. But it should have read: “Loving life. Don’t take that scooter ride in Chengdu.”