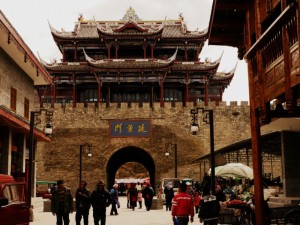 Songpan may not be the first Chinese city on the average tourist’s itinerary, but it boasts some of the best signage in the country. All the shops in Songpan seemed to have purchased their shop signs from the same sign-making company.  I imagine there’s this entire village in the middle of China where all they do is carve beautiful wooden Chinese-English signs for small stores all around the Middle Kingdom. 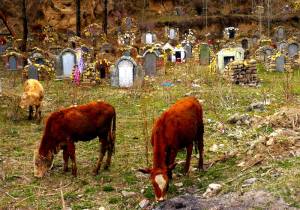 What a difference an ‘e’ makes.

At least I hope that’s a mistake. But who knows? What goes in, must come out.

Spelling is not always the culprit. Even if the letters are all correct, the literal translation sometimes doesn’t convey the same feeling as the original. Take for example, the Romantic Foot Washing Center.

Signage isn’t Songpan’s only claim to fame. It has a reputation throughout Sichuan as a starting point for horse treks. But since we weren’t in the mood for a three-day horse-trek through the mountains, Songpan had little else to offer. All in all, it reminded me of Deadwood, South Dakota. One main stretch of road, with brown hills towering behind the store fronts on either side.

Wandering behind the newly furnished facade of Songpan/Deadwood and seeing the conditions under which most people actually lived, Benny made the observation, “The main street looks very nice, but it’s very poor.” To which I replied, “That’s the definition of China.” Many cities have been set aside as examples of modernity, with airports and high-speed trains that mock their Western counterparts. But like the back alleys of Songpan, much of the rest of the country has a long way to go.

We hiked up to a small temple under construction to peer out over the valley, and I bid farewell to Sichuan. My journey from Shanghai to Hong Kong to Guangxi, Yunnan, and Sichuan Provinces had come to an end.

My original plan was to continue to Xian and Beijing, but the purpose of the trip was to see where I would stay for the coming year, and even without seeing the northern half of the country, I knew where I wanted to be. 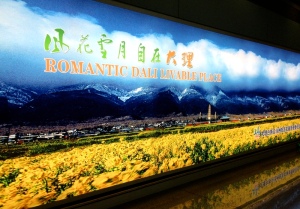