Observations on a multilingual bookshelf 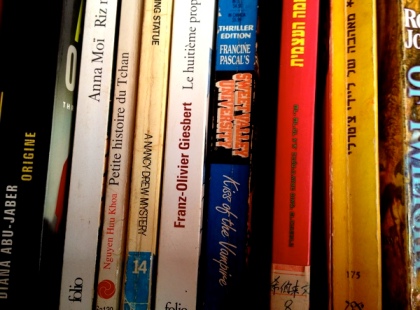 No, I wasn’t making that up.

Germans are more generous with their books than English speakers. Just look on a bookshelf of free books at any cafe or guest house. Well, they’re not exactly free. It’s more of a take-one, leave-two type of deal. The English language books are slim pickings. The most promising title at my favorite cafe is Sweet Valley University: Kiss of the Vampire. It’s been there for months. Probably decades.

Meanwhile, there’s an entire shelf devoted to German books that readers have left for others to enjoy. Including a Steig Larsson book with one word in its title. How is this possible? He only wrote three books, and in English each title is about twelve words long: The Girl With Hair on Fire Who Stole The Wasp’s Tattoo et al. But in German it’s all one word: Frauleindachshundbagelcoleslaw.

Or maybe German readers have decided that reading German is its own punishment and that’s the last thing they want to do on vacation so they take the English ones instead.

The point is, English language books are in high demand over here. Dali is very unusual in that there are three bookstores with English selections. But due to the high demand and low supply, at two of those stores prices range from $10 to $20 for a simple paperback—keep in mind that’s about as much as a night’s lodging, and that’s for used books.

So I was ecstatic to find the Black Dragon, a bookstore that will let you check out a used book for about 30 cents per day. The owner says it has the biggest selection in Yunnan Province, including Kunming, and I believe her. In fact, the only equivalent selections I’ve seen were in Shanghai and Hong Kong. [For used books in Hong Kong try the “Book Attic” on Elgin St. Impossible to find, but worth the quest.]

When I first discovered the Black Dragon, I became addicted. Wanting to travel light, I had left my brand new Kindle in Shanghai. (File under “It Seemed Like a Good Idea at the Time.”) Starved for reading material after four months on the road, I went through six or seven books in half as many weeks…Year of Wonders, Andromeda Strain, The Road, Water for Elephants, and more. It’s a vicious cycle because you want to finish a book as soon as possible because you’re paying for it. But then when you go to return it, there’s this other title staring at you, calling from the shelf. Take me home…

Some of my favorites this year have been Fight Club, Andromeda Strain, The Man From Beijing, Pillars of the Earth, and two scifi novels I brought from home: an MP3 audio-book of Ender’s Game and a fun page-turner called Seeker.

Only one thing cured me of my reading addiction. Stephen King’s The Stand, the expanded version. The original print was about 400 pages shorter because the publisher didn’t think the public would stomach an 1,100-page book. I chose The Stand because I was taking a trip to Laos and Vietnam and wanted the longest book available. I got what I wished for.

I can understand King’s desire to put back the 400 pages, but around page 800 I couldn’t help but think, had I read the original version, I’d be done by now.

I’m thankful King slowed me down. At the rate I was going there was a good chance that before year’s end I’d have to read Sweet Valley University: Kiss of the Vampire.