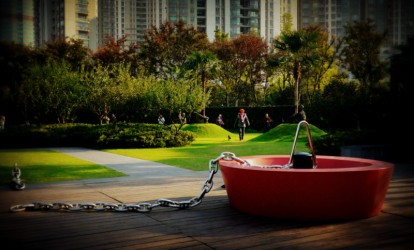 There is a Chinese National Bureau of Bathroom Fixtures whose soul function is to ensure that no two hotel shower fixtures are alike. Their rousing success is a testament to the efficacy of authoritarian regimes.

Knobs. Levers. Handles. Pulleys…Could turning the handle to the right bring hot water? Or the top of the ball-joint? Or why not left? What are the foreign aggressors trying to say about the Left anyway? Is not Left even better than right? Why kowtow to internationally-accepted standards?

Most shower heads are like those of Europe, where you can remove it from the wall. But unlike Europe, if you keep it on the wall, instead of a fine jet of hot water, a small stream will leak down the tile, hence the mildew.

In the West it’s trendy to put random Chinese characters in designs. This hotel bathroom tile in Midu, Yunnan, shows the feeling’s mutual. The “WERTY” kind of gives it away.

Some showers have two shower heads, one stationary and one removable. Perhaps pushing in the knob switches heads. Or pulling the knob. Or twisting it. Give up? Just kidding!…One head is decorative.

There is no enclosure around the shower. No door, no curtain, no little ledge. The bathroom is the shower. This means by the time you’re done, everything in your bathroom will be wet, including the toilet paper. But if you leave the vent on and the window open, the floor will be dry by your shower tomorrow morning.

If it is a squat toilet bathroom, consider the shower and the toilet two parts of the same fixture. The water from the shower essentially goes down the toilet.

This means never remove your shoes in a Chinese bathroom, especially not with a squat toilet, and especially not when showering. [More on that in “Ready or Not, Here We Squat!”]

Despite the stories you hear of hotpot restaurants exploding, gas heating is relatively rare. Some hotels and apartments have electric water heaters. But most have only solar power. The water is pumped up to tanks on the roof where it is heated by the sun in narrow pipes. These solar heating devices are an awesome move, environmentally speaking. And in a country with the population of China and limited natural resources, a necessity. The only side effect is that when it’s boiling hot and sunny outside, you’ll have all the hot water you need, and when it’s cold and rainy outside, your shower will induce hypothermia.

I recommend staying in hotels in Shanghai and Shenzhen. On four of my five trips to Hong Kong I made it a point to stay at the same hotel in Shenzhen, precisely because none of the above is true there. I’d just stand there in the shower all day, not even running the water. Just admiring the clearly labeled soap and shampoo dispensers.

The shower in Shanghai was almost as good but the dispensers were labeled only in Chinese, so I couldn’t be sure if I was shampooing my body or soaping my hair. To be safe, I used both on both. Of course, for all I know they could have been shampoo and conditioner, in which case I can finally say I have a well-conditioned body.

Up next in our Chinese restroom series: “Ready or Not, Here We Squat.”