If you’re traveling to China, the first characters you need to learn are 女 (woman/female) and 男 (man/male).

That is unless you’re traveling to China on a temporary Z-visa, in which case the first character you need to know is “000”. It means thirty. Why they can’t print “30” on your visa instead of “000” is a mystery as ancient as the Middle Kingdom itself, but that’s a story for another day.

Back to men and women. The character for woman is pronounced nu.

They say it looks like a woman holding a baby. Whether she’s holding it across her lap or burping it is entirely up to you. Go wild.

The man, or male, character, is pronounced nan.

It looks like a dancing robot. To me, at least. Turns out I’m not that far off. On its own, the four-square head with a tail (电) means electricity.

However it helps you to remember these characters, do so, because unless you’re in Hong Kong or Taiwan, restrooms will not say Men or Women. Or nan and nu. They will not have internationally recognized icons for male and female, like, I don’t know, two bald dudes, one wearing a dress. No, they will say 女 and 男 and if you enter the wrong one, the women inside will call you something that is neither of the two. 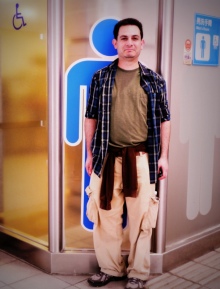 Note the subject stands before a clearly labeled men’s restroom. From this we can conclude the subject is not in mainland China, but in Taiwan.