One of the most entertaining traditions of the Chinese New Year is a performance known as Sailing a Boat on Dry Land. In it, a female singer ‘wears’ a boat by carrying a long bamboo scaffold around her waist in the shape of a small pleasure craft. Cloth draped over the bamboo hides her legs and gives the appearance she’s sitting in a vessel. Sometimes the boat is ‘guided’ by a man who, as the woman walks around, pretends to be steering the craft. The two performers sing songs, usually comical, as the sight of a woman walking around in her own bamboo boat scarcely lends itself to anything else.

Legend has it that a New Year’s tradition of “Sailing a Boat on Dry Land” had its origins in the reigns of Emperors Yao and Shun. Four-thousand years ago, China had a serious problem: the Yellow River, aka “China’s Sorrow.” China’s Sorrow had a naughty habit not only of flooding, but of physically changing its course. Every time this happened, the countryside flew into chaos. Countless victims drowned, far more were displaced. Cities and towns lay in ruin. Not to mention the impact on farmland, the devastation of which could signal starvation across the kingdom.

In the Judeo-Christian Bible, the flood is an act of God. Nothing in human ability could alter the course of events or avert the catastrophe, except perhaps B.Y.O.B. (build your own boat) the more cubits the better. In Yao’s world, even if floods were caused (or, at best, ignored) by heaven, humans could, and should, do something about it.

So Yao put his best man on the job: an engineer by the name of Gun. Gun devoted nine long years of his life to the task. In the meantime, Yao was getting up there in age, and in the 100th year of his rule, he handed over the throne to his daughters’ husband Shun (no, that apostrophe is not in the wrong place), the last of the Five Emperors.

Gun continued to struggle to solve the problem of taming the river, until one day, after nearly a decade of dedication, Gun failed. Failed miserably. For his incompetence, Emperor Shun had Gun executed.

Gun had a son name Yu. (‘Yu Son of a Gun’?) Emperor Shun enlisted Yu to finish his father’s handiwork. Now you might think Yu would be miffed about working for the guy who just executed his dad, but not Yu. To the contrary, taming the Yellow River was the one thing that would bring honor back to his father’s name. Yu spent almost twice as long on the job. Seventeen years of ceaseless toil. They say Yu didn’t even go home in all this time. That he passed by his house three times, but was so engrossed in his task, he never even went inside.

In the end, Yu succeeded where his father had failed. He tamed the river, and Shun was so impressed, he named Yu as heir to the throne. Hence, we have Da Yu, Yu the Great, or Yu the Engineer, the first ruler of China’s Xia dynasty. Because of the tamed river, boats ended up on dry land, and our Chinese New Year performers recall the ingenuity of the ancient ancestor. When Yu tamed the river, boats found themselves in what used to be rivers but were now dry land; hence the duet of the woman and man Sailing a Boat on Dry Land reminds us of the ingenuity of Yu the Great and of Chinese engineers ever since. 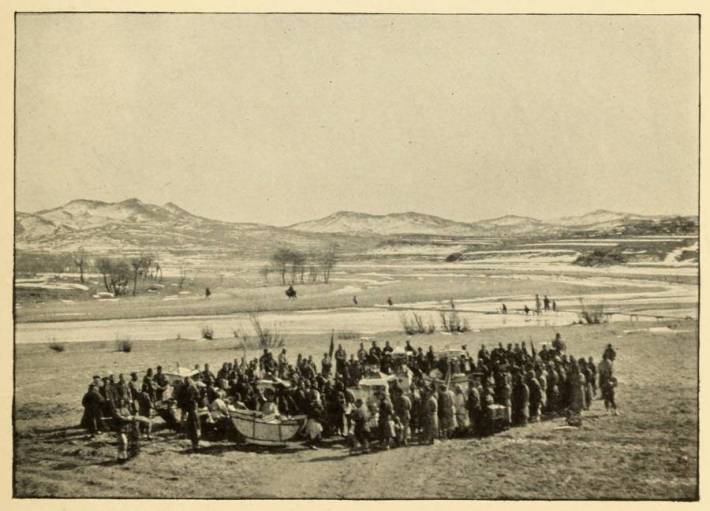 Sailing a Boat on Dry Land performance at the Lantern Festival (c. 1910)

Though Yu was the founder of the Xia Dynasty, one could argue that it was his son Qi who made it a dynasty and separated it from a bunch of emperors who simply passed down power to the most able contender. Yu had designated his son-in-law would take over after his death. However, Qi would have none of that. In the struggle for power that followed Yu’s death, Qi seized the throne instead. Maybe he was miffed about Dad passing the house three times in seventeen years and never coming in to say hi. At any rate, the throne passed from father to son, and would continue on a more-or-less hereditary path for the five centuries of the Xia.

Other than the above, we know very little about the early Xia Dynasty. The general consensus is that the Xia were just a myth. If they had a written language, they didn’t write on materials with a long shelf life, like bronze or bone or stone. What we do know is, just as it had begun, the Xia Dynasty ended with an ambitious engineering project…

Five-hundred years after Yu Da, the last king of the Xia was King Jie. King Jie must have been fed up, what with people telling him about awesome great ancestor had been. 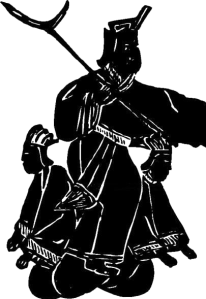 King Jie of the Xia Dynasty

“You know what would be really cool?” suggested his favorite concubine Mei Xi. Not a dam to control the river, not irrigation channels to help the farmers, but a really, really big lake. And here’s the kicker. Fill it, not with water, but with wine.

Wine Lake was a massive project. The Titanic of its day, it was so large that during its inaugural tryout, when King Jie popped open the cork on this fermented lagoon, 3,000 of his closest friends and soldiers got drunk swimming around the lake and drown. Now, given the choice between drowning among Atlantic icecaps or a pond of Chateau Margeaux 1959 (BCE), Wine Lake doesn’t sound like a bad way to go, but when the local populace got wind of this Malvasian grave, some felt it hadn’t been a prudent way to spend their hard-earned tax dollars.

Austerity measures were implemented, which, back in 1600 BCE, meant overthrowing the king. Thus, after 500 years, China’s first dynasty came to a crashing halt. 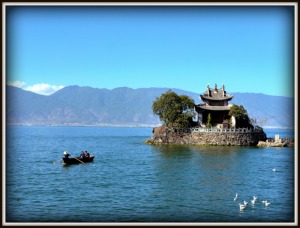 No pictures of Wine Lake. Lake Erhai will have to suffice.