According to legend, before the invention of writing the ancient Chinese used a knot-tying technique to keep their records, but the tedious process had its limits, and the Yellow Emperor was literally at the end of his rope. Enter the Yellow Emperor’s advisor and royal historian, Cang Jie. Confucian ideology praises the ideal of a strong central ruler guided by a far-sighted advisor. The dynamic duo who wrote the book, so to speak, back in the early third millennium BC were the Yellow Emperor and his four-eyed sidekick Cang Jie. And by four-eyed we’re not talking bespectacled. Artists depict Cang Jie as literally having four eyes, one set above the other. One day out walking Cang Jie noticed patterns in nature. Particularly the lines on the shell of a tortoise. His subsequent study of patterns in nature revealed other repetitions, such as the tracks of a bird’s claws. Cang Jie used these patterns and others like them as the basis for the antecedents of Chinese writing. Chinese Language Day is a very recent holiday, celebrated around April 20th, with a very ancient origin. It takes place on the solar term known as Guyu, or “Grain Rain.”

“The Guyu festival, also a solar agricultural term, came to be because legend declares that when Cang Jie created Chinese characters, heavenly secrets were revealed. This made the deities and spirits cry, their tears as drops of millet from the heavens.” (Legendary origins of the Chinese Language – Epoch Times)

Anthropologically speaking, the first evidence of Chinese writing has a later origin, around the twelfth century BC, near the modern city of Anyang in Henan Province. Stumbling off the night train, I sleepwalk to the hotel nearest the Anyang train station. A nondescript building across the street from the station, a hotel called “Soo-Ba,” or in English, “Super 8.” Beijing alone is home to over a hundred Super 8’s, and the hotel chain has franchises in over 200 Chinese cities, Anyang included. Originating in Arberdeen, South Dakota, Super 8’s success in China hasn’t been entirely due to its ability to adapt to Eastern ways, although that is a large part of it. In China, eight is the luckiest of numbers. The Beijing Olympics, for example, opened on 8/8/08 at 8:08 in the evening. [Four is the unluckiest. The word is homonymous with the Chinese word for death. The number 6, on the other hand, goes both ways. There’s a popular chain called Motel 168, but no Motel 6. A Hotel 4 would be dead on arrival.] Despite my haggling, the clerk holds steady at twice the nightly rate I’ve set for myself. Until I’m physically leaving the hotel lobby, at which point she all but pulls me back in and offers the rate I’d requested. 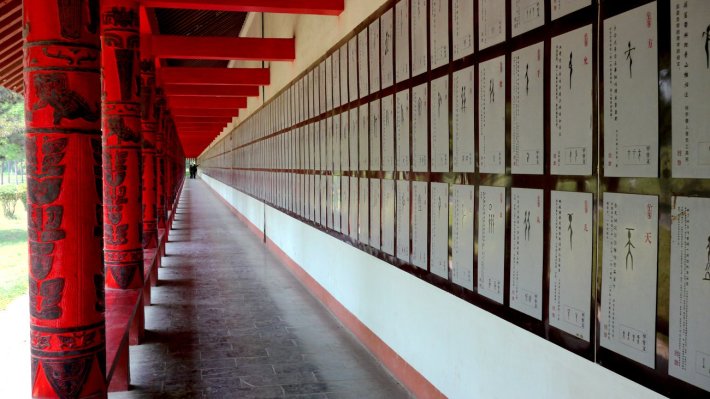 The same thing happens when I hail a cab to the Yinxu Ruins. The driver quotes twenty rmb. I cross my two index fingers in an X to signify shi, ten. (The gesture for 10 looks like the Chinese character 十.) He counters fifteen. And there we reach the impasse. I should have offered five. Now he is obliged by centuries of haggling etiquette to hold at fifteen. A female taxi driver pulls up, with index fingers crossed (shi,) whisks me off to Yinxu. Like the prices, in China, nothing is written in stone. Except for everything written in stone. Red Chinese characters are etched into every massive boulder from Shanghai to Sichuan. At first I assume these big red engraving convey poignant, eternal sentiments: “Talk does not cook rice.” “In the world of the blind, take side streets.” Only in Yangshuo do I find a boulder translated into English:

The stones at the Yinxu complex speak with purpose. One upright boulder in the center of the courtyard shines with bright red characters: 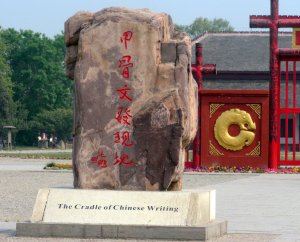 Yinxu: The Cradle of Chinese Writing

Inside the museum, a plaque makes no bones about the company Yinxu keeps:

The flat, simple park, tucked modestly into the suburbs of Anyang, may not shame the pyramids at Giza. It’s an unobtrusive plain, mostly glass, laden with dirt paths, some trees, and a smattering of one story buildings. But these squat structures cover one of the greatest archaeological finds of the 20th century. The Xia, China’s first dynasty, left no written records, and as a result they’re referred to as a legendary dynasty. Until about 1900, it was believed that their successors, the Shang, left no written records either. We knew the details of their existence—the succession of their kings, their wars—from the writings of scribes like Sima Qian, China’s Herodotus, writing a thousand years later.

In the Shiji, written in the 2nd century BCE, Sima Qian recounts the origins of the Shang founder, Qi. His was a typical birth. His mother was Jiandi, a concubine of the great Di Ku. One day when Jiandi went out to bathe Di Ku, she spotted a swallow dropping an egg. Jiandi swallowed the egg and thus became pregnant. And out popped the future Shang founder Qi. Despite these records, evidence-obsessed historians considered the Shang a legendary dynasty. And they might have remained that way, but for one little ceremony performed during the reign of the last nine kings. A ceremony that would—3,000 years later—earn the Shang their long-awaited induction into the Bonafide, Certified Historical Dynasties’ Hall of Fame. It turns out the Shang did have writing. They may have written a great deal, on bamboo, on silk, on items that have not survived the millennia. It was only their divination rituals that required the scribe to write on tortoise shells and ox scapulas. Questions were written on the bones, or rather statements, such as:

“Lady’s Hao’s childbirth will be good.“

Then the shells and bones were then poked with a heated object until they cracked, and the diviner would read the cracks. It was like a true or false test meets a magic 8 ball. A crack one way meant “All signs point to yes.” The other way: “Outlook not good.” Of course the Shang kings were no dummies. They’d do this several times and tally the results. Four out of five? You’re good to go. Three to two? Outlook not clear, ask again later. They had an intricate system of asking questions of specific deceased ancestors, and they’d keep track of their deceased ancestors’ prognostication skills. Once the kings were reasonably assured that “There will be no disasters in the next ten days,” or that “Lady Hao’s delivery will go well,” they either tossed aside and buried the bones or held onto them to record what eventually happened. Which is how we know, sad to say:

“Lady Hao’s birth did not go well. It was a girl.” (Shang oracle bone)

The bones waited patiently beneath the earth for three millennia, until the end of the 19th century when Chinese pharmacists discovered that tortoise shells and ox scapulas could fetch good money if properly rebranded. In a move that would foreshadow the modern pharmaceutical movement, pharmacists claimed that when ground up into fine powder, these “Dragon Bones” were the miracle cure for malaria.. (Eat your heart out, Pfizer.) By a stroke of great luck, in 1899, Wang Yirong, the Director of the Imperial College in Beijing, contracted malaria. Or, another version goes, a family member did. Either way, Wang Yirong purchased these old tortoise shells for medicinal purposes. Before grinding them into dragon bone soup, however, he noticed some peculiar markings on the surface. Being the director of the Imperial College, he recognized what they were: the forerunner of Chinese characters. He tracked the origins of the bones to a small town outside Anyang, and soon excavations for more Shang artifacts began all around the Anyang region. Archeologists, both professional and aspiring, turned up thousands of these Oracle Bones, as they were now called, and intimate details of the lives of the Shang kings were gleamed from their markings. Sadly, Wang Yirong didn’t live to see the full impact of his find, and it wasn’t the malaria that did him in. During the Boxer Rebellion in 1900, he sided with the Boxers. The movement failed, and Wang committed suicide by taking poison and swan-diving into a well. (National Geographic – The New Story of China’s Ancient Past – Peter Hessler)

Years later another scholar, Wang Guowei, took up the task and established a timeline of Shang kings based on the markings on these bones. “If only Sima Qian had lived to see this day,” says podcasting legend Laszlo Montgomery, “because when the inscriptions were figured out, and they placed the results side by side with what Sima Qian had written in his Shiji nineteen centuries earlier, they matched perfectly.” (China History Podcast, Episode 15) Call it the Dragon Bone Curse, like Wang Yirong, Wang Guowei also committed suicide. In 1927, as Chiang Kai-shek’s troops entered Beijing, Wang Guowei jumped into Kunming Lake. But because of the findings of the two Wangs and others who followed, historians have slid the Shang over to the historical side of the chalkboard, leaving the Xia the lone, legendary dynasty. 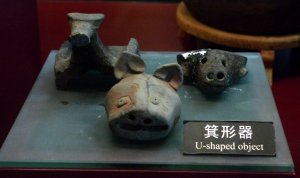