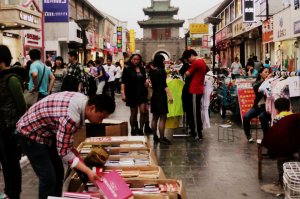 The smartest purchase I make all year is a fifteen rmb folding stool ($2.50) right there in the Anyang train station. A tiny backless stool you see the old men and women sitting on in the park or on the street as they play cards or talk. At home, the eight inches of wood or plastic would be relegated to the kiddie table, but here, these Lilliputian thrones line the sidewalks from the coast to Karakuri.

The purchase is the result of a conversation I had moments ago with a local in the waiting room who pointed at the similarities between our tickets. “Yes,” I say, “we’re on the same train.” But indifferent cars. I take another look at his ticket. After the car number there’s a seat number. On mine there’s a symbol.

Others around us get into the conversation. This is apparently quite funny if you are not me. I’ve heard horror stories of seatless train rides. Masha, a doctor from Israel, ended up on one such 11-hour trip to Chengdu. She hadn’t understood that the cost of her ticket didn’t include an actual seat until boarding the train. I met up with her in Chengdu after the ordeal, the light drained from her eyes, her spirit crushed. She explained she’d come from Lugu Lake, one of the most beautiful places in all China, and the 11-hour overnight stand-a-thon was just the beatdown she needed to restore her faith in nihilism.

Boarding the train to Zhengzhou, I unfold the stool in a corner near the rear of the carriage, across from the restroom. Beside me another man sits and beside us in the corridor stand seatless passengers.

Ninety minutes pass like a breeze, even if that breeze is wafting from the restroom. In Zhengzhou I fold up my stool and venture out into a sepia haze that coats city traffic gridlock, both of which make Shanghai look like Singapore.

Zhengzhou is more or less an artificial city. Beijing chose Zhengzhou to be the provincial capital in 1949 not because of any historical value but because of centrality.

My brief layover consists of wandering through shopping complexes that surround the station. The first mall appears to be in the midst of a going-out-of-business sale. Or an apocalypse. Merchandise is strewn about the floor. Shoppers push and shove. The entire six or seven story edifice is chaos and pandemonium. But entering a second mall, and a third, I find it’s no sale. This is an ordinary day in a typical shopping complex in Zhengzhou, where the average Monday afternoon rivals a Black Friday Walmart.

In my short time here, with the gridlocked traffic and the choking haze of pollution, I conclude Zhengzhou city is not the first place to which China’s sight-seeing elite flock, except as a point of transit. To the southwest lies Songshan Mountain, one of the “Five Great Mountains of China” and the birthplace of Shaolin martial arts. Martial artists around the world make pilgrimages to the Shaolin Monastery, which dates back to the Northern Wei Dynasty (386-535).

To the north of the city lies a more modern draw. The famous yet controversial ninety-foot statue of…well, no one knows with absolute certainty. In 2011 a regional branch of the China Soong Ching Ling Foundation built a massive bust statue to celebrate the 100th anniversary of the fall of the Qing Dynasty, the aforementioned Xinhai Rebellion. Passersby assumed the bust represented Soong Ching Ling, the wife of Sun Yat-sen and the organization’s namesake, although the likeness is debatable. Soong Ching Ling was the daughter of bible publisher Charlie Soong. The Soong sisters married well, or perhaps their husbands married well, as an induction into one of China’s wealthiest families didn’t tarnish their careers. One Soong sister married finance minster H.H.Kung. Another married Chiang Kai-shek, powerful leader of the KMT and later the Republic of China. And of course Soong Ching Ling married the immortal Sun Yat-sen, modern China’s beloved father. A recent movie summed up the three sisters in its tagline: “One loved money. One loved power. One loved China.” The statue’s official title is “Daughter of the Yellow River.”

But the controversy isn’t over who the statue represents. Rather, it’s where the charitable foundation got the money to build it. In the wake of a charity scandal that involved the Red Cross, there’s been increased scrutiny and public mistrust of charitable organizations. In 2011, a woman named Guo Meimei proclaimed herself to be a “commercial general manager” of the Red Cross Society of China. Bloggers noticed that her internet profile revealed a lavish lifestyle, complete with a Maserati, a Mercedes, and designer clothes and handbags, and wondered just how much of their Red Cross donations had gone to those like Meimei rather than Sichuan earthquake survivors.

In truth, Meimei was loosely related to the charity. Her sugar daddy was though—he ran a Hong Kong-based organization that coordinated events with the Red Cross. But charitable donations to the Red Cross took a nose dive, and the fiasco brought increased scrutiny to not-for-profit projects.
The Daughter of the Yellow River reportedly cost $20 million to construct and stands on a 15-hectare plot intended to be the organization’s youth center. The whole complex was budgeted at $120 million. (A lot of kuai.)

In the end, the Daughter of the Yellow River will prove less eternal than ‘China’s Sorrow’. The day I pass through the provincial capitol, the kindly ninety-foot woman watches over the good people of Zhengzhou. Before she’s even completed, for reasons never made public, she’ll be slated for demolition.