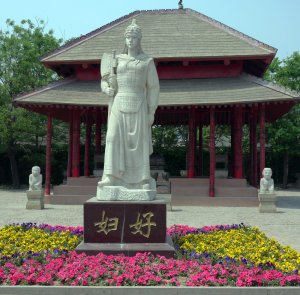 At the Yinxu ruins in Anyang, I visit the underground tomb of Lady Fu Hao, wife of King Wu Ding. Fu Hao was unusual in that she was a high-ranking military general—the most powerful of her day—as well as a priestess. She had command of up to 13,000 men at one point. In her tomb stands the solid bronze blade of her axe, an axe I would not be able to lift, let alone wield. The Shang’s mastery of bronze weapons ensured the Shang would dominate other tribes of the region for centuries.

Just up the path from Fu Hao’s tomb lies another archeological find. An underground tomb of chariots, all lined up and ready to go. And which at the time of burial were fully manned with horses and drivers.

Early excavations had turned up one detail about living in the Shang community that the Shang (1600 – 1046 BC) didn’t always print in the brochures. When archaeologists excavated the tombs around Zhengzhou and Anyang, they uncovered rooms filled with scores of skeletons. Headless skeletons. That’s right, the Shang people had no heads, thought the archaeologists. Until, we imagine, some junior assistant digger played by Justin Long opened the closet door, and out poured, you guessed it, seventy-some-odd skulls. The archaeologists breathed a sigh of relief. The Shang were not headless mutants; they were just really, really fond of human sacrifice. Wild about it. Couldn’t get enough of it.

It’s not known whether the headless sacrifices were buried with the deceased to protect them or with whom to play mahjong  in the afterlife. Or whether showing up to Heaven with seventy dead laymen was simply the Shang’s way of being polite to their celestial overlords, like not showing up at a house party without booze.

And by the way, did the Shang love their booze. While visiting the National History Museum in Beijing, my friend Tsuen points out numerous wine vessels from the Shang era: “This is a gu,” he says, checking the placard for the English translation. “Wine vessel.” And coming across the next artifact, “You,” he reads, perplexed, “Wine vessel…It’s the same word in English.” We pass twelve Chinese terms for ‘wine vessel,’ and the Shang used them all.

Now bronze as you know is an alloy of copper and tin, but what separated the Shang from your typical run-of-the-mill ancient dynasty was they added a secret ingredient to the mix: lead. Up to 20% lead in some cases. Whether this was done to increase the malleability of the vessel during its sculpting or they just thought lead would add some oomph to the bouquet is unknown. What is known, what’s been show in experiments duplicating the Shang bronze vessels’ composition at just 8% lead, is that within 24 hours of pouring, the wine could have soaked up 116,000 micrograms per liter. (The CDC’s yardstick for lead poisoning is a blood level of 100 micrograms.) Leading researchers to conclude that the Shang could indeed have ingested up to 85 mg of the stuff daily. In other words, if they were as hearty drinkers as the excavations lead us to believe, the Shang sampled a more than healthy dose of lead poisoning with their drug of choice. Which might account for some of their later, er, eccentricities…

In the end, there was one thing the Oracle Bones didn’t predict. The Shang’s demise. The last Shang King, King Zhou, did what all last kings must: build a lake of wine. Wait! King Zhou! Not a lake of wine! Didn’t you read the last chapter about the Xia! No, he did not, because, like we said, the Xia Dynasty left no written records. In fact, King Zhou went one step further than our old friend King Jie. In addition to Lake of Wine he created…Forest of Meat.

Meat Forest was an island in the middle of the lake on which meat was impaled on branches, in case the king and his guests got hungry after swimming around Wine Lake.

Believe it or not, unlike King Jie, Wine Lake and Meat Forest were not the cause of King Zhou’s downfall. According to the Shang’s successors, it wasn’t the king’s search for pleasure that angered the Heavens.

It was his love for pain.

Match the Concubine with the Dynasty she brought down

[That was a freebie. Don’t get cocky.]

As we delve further into imperial history, despite ancient China being a male-dominated society, we find that consorts, concubines, and empress dowagers often get credit for the rise and fall of great dynasties. Okay, not so much the rise, but definitely the fall. And King Zhou’s beloved was no exception.

King Zhou’s wife, Queen Daji, wasn’t the guiding force behind Wine Lake and Meat Forest. But she was as ‘dodgy’ as her name phonetically implies, and apparently she was quite the sadist. That’s why King Zhou’s top scientists were enlisted to find new, cutting-edge ways to torture captives. And in ancient China, that was a tall order.

In the Yinxu museum, I pass a display case off cooking supplies. Ah, ancient tupperware! Closer inspection reveals the exhibit to be a bronze vessel with a human skull inside, half-buried in dust and dirt, teeth smiling up at me. The plaque reads:

“A sacrifice could be conducted in various forms. The decapitation of a human followed by cooking the head in the bronze yan-steamer might be the cruelest form of all.” 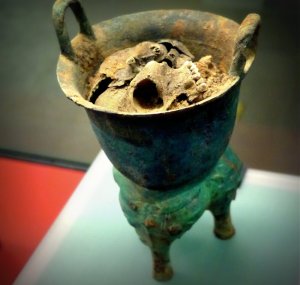 The fact that there’s a “might” in that sentence is why I make it a point not to buy second-hand kitchenware in Henan.

But that wasn’t Queen Daji’s favorite torture. No, hers was the “Cannon Burning Torture.” A bronze cylinder was heated up over a pan above a raging fire until it was burning hot. Then, the captive was forced to walk upon the cylinder to keep from falling into the inferno below. And as if that wasn’t funny enough, the cylinder was coated with slippery oil, causing the victim to struggle to maintain his balance, until he mercifully fell off the cylinder and burned to death.

As one would imagine, this didn’t sit well with the populace, including the hero of our story and the ancestor of the subsequent dynasty: King Wen of the land of Zhou.

Yes, to make things confusing, the dynasty that overthrew King Zhou of the Shang Dynasty would be known as the Zhou Dynasty (probably by the same guys who placed Shaanxi Province right next to Shanxi.) But in Chinese, the Zhou in King Zhou is different from the Zhou in Zhou Dynasty.

As you can guess, King Zhou did not pick out his own name. It was bestowed upon him, no pun intended, by posterity. 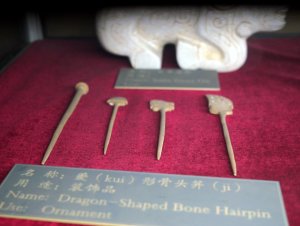 Zhou (the land, not the king) became the most powerful state within the Shang’s dominion. Its leader Wen gathered the support of other dukes, infringing on King Zhou’s turf. So King Zhou threw Wen in jail.

Seven years in prison had given King Wen a lot of time to think. One thing he had pondered was the divination method known as the I-Ching. Even then the I-Ching was ancient. Tradition says that during those years as King Zhou’s captive, King Wen completely revamped the I-Ching, releasing I-Ching 2.0, a full-fledged operating system for the schools of thought that would dominate the Chinese think-scape for thousands of years. (The original model ascribed to the Sovereign Fuxi is known as the “Earlier Heaven” model. King Wen’s is called the “Later Heaven”.)

The other thing seven years in captivity afforded Wen time to reflect on was how to overthrow the bastard who, as Wen rotted in jail, was backstroking around Wine Lake eating shish kabobs off Meat Forest. Wen didn’t live long enough to put his strategy to the test, but he had two very talented sons who would go down in history as King Wu and the Duke of Zhou. Just as Yu avenged his father’s memory by taming the Yellow River, Wen’s son Wu tamed the Shang. With support of other dukes who were upset at the Shang’s rule, Wu launched an attack from the west while the Shang king was dealing with attacks from the east. And with the death of King Zhou, so died China’s first Bonafide, Certified, Historical Dynasty.

Sculpture of King Wen at the Yinli Ruins, Anyang