Origin of the Cold Food Festival

Each year in early April, the Chinese remember the dead on the festival known as Qingming. On this day, families visit and clean the grave sites of their ancestors. For this reason, it’s sometimes called Tomb-Sweeping Day.

After the Chinese Revolution back in 1949, the festival was banned as a superstitious vestige of imperial days, and only made officially legal again in 2008.

But its roots actually date back to before imperial times, to the Spring and Autumn Period, making it one of China’s oldest traditions.

You know what, forget it. There are lots of states. The ones to keep rack of for now are Jin, Qin, and Qi. [For those who prefer the old Wade-Giles, that’s Chin, Ch’in, and Chi. (Thank tian for Pinyin.)]  Here’s how it breaks down:

In the 7th century BC, the state of Qi in the northeast gets the upper-hand, thanks to a strong duke named Huan. He’ll rule as the ‘Hegemon’ for four decades. 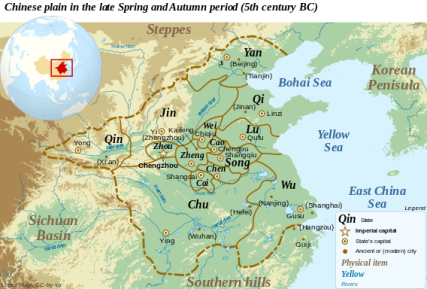 Hegemon is like the new king. Technically, the Zhou king’s still in charge, but in reality his blessing is just a formality. The duke of whichever state is the most powerful is the de facto ruler. Qi eventually loses power when, forty-odd years later, a five-way struggle between Huan’s descendants cripples the state.

Anyway, to the west of Qi there’s a rising power: the Duchy of Jin. And its exiled prince will become the Second Hegemon. But he’ll have to spend 19 years in exile to get there. His name is Chong Er…

Chong Er wasn’t first in line to be duke. His elder brother committed suicide when their dad’s favorite wife conspired to put her own son on the throne. To avoid hers and Dad’s assassination attempts, Chong Er fled into exile, bouncing from court to court.

After Dad’s death, the new kid on the throne lasted only a month. An official named Li Ke iced the boy and invited Chong Er back to the capital to rule. Chong Er said thanks, but no thanks. He’d rather live far from the maddening crown.

So Li Ke crowned another brother, a sibling named Yiwu. Yiwu repaid Li Ke for his loyalty, as one would expect, by forcing him to commit suicide.

Chong Er’s relief at not having to duck his father and step-mother’s assassination attempts was short-lived. While couchsurfing across China, Chong Er had gained a reputation as a capable leader and all-around good guy. So now brother Yiwu was forced to kill him as a potential rival. Once again, Chong Er fled into exile in Qi.

Why Qin? Jin had been struck by famine some years earlier. The neighboring state of Qin agreed to sell them food. The following year, when Qin was struck by a similar famine and asked Jin for help, Yiwu returned the favor by not answering their calls and changing his number. “Sorry, can you hear me now…?” [Click.]

Qin was not pleased. They attacked Jin, imprisoned Yiwu (after his chariot was caught in the mud) and the two states had been frenemies ever since.

Qin had put Yiwu back on the throne, but kept his heir as a hostage. After Yiwu died, the heir had managed to escape and became the new duke. So Chong Er knew who to go to for help. With Qin’s assistance, Chong Er killed the new duke and made himself Jin’s ruler.

As Duke, Chong Er wasn’t about to forget his steadfast friends. No more of this rewarding loyalty with vengeance, like previous rulers. Chong Er set out to repay the trusty sidekick who had stayed with him all those nineteen years in exile, a guy named Jie Zhitui.

Jie was both Chong Er’s Robin and his Alfred. During the darkest hours of their exile, when Chong Er had taken ill, Jie Zhitui nourished him by cooking up a batch of meat soup. Later, when Chong Er reflected on the source of this meat—considering their dire circumstances—he learned that Jie had torn flesh from his own thigh to nurse him back to health.

Now, not one to forget his friends, Chong Er sought to reward Jie Zhitui. But first he had to find him. Jie had become a recluse in the mountains, preferring to hole up in the mountains with his mom than suffer the hypocrisy of the Jin court. 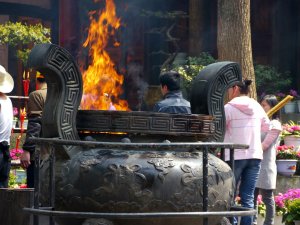 Unable to get Jie Zhitui to show himself, Chong Er tried to smoke him out by starting a fire in the mountains. (File under: “Seemed like a good idea at the time.”) Fire being one of the more fickle of the five elements, it raged out of control. The mountain went up in flames, and Jie Zhitui and his mother were consumed in the blaze. 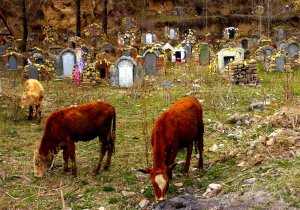 Chong Er, by the way, took the Jin State to a whole new level. He formed an alliance with Qin, Qi, and Song to take on the rising power of Chu.

Chu’s defeat in the climactic Battle of Chengpu (632 BC) was the biggest clash of the period, and the first Chinese battle documented with such detail that scholars can study its strategies even today. The victory solidified Jin’s status as the home of the new Hegemon.

However, Chu would get the last laugh. As Jin grew, Chong Er divided the state into jurisdictions, a move that would eventually lead to its dissolution. A century and a half after Chong Er’s death, the families in charge of these six jurisdictions were more powerful than the duke himself, leading to the partition of Jin (known in the history books as the Partition of Jin), and marking the end of the Spring and Autumn Period.