“I am the son and heir of nothing in particular.” — “How Soon Is Now,” The Smiths 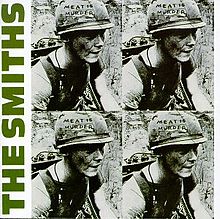 With the reign of Chong Er, the Dukedom of Jin became The Smiths of its day. Jin rocked the Spring and Autumn charts for a good century or more. But by the 5th century BC, the feudal families that made up Jin were more powerful than the duke himself, and its individual members were itching to go solo. In essence, a reprise of what had happened to the Zhou Dynasts—now figureheads without power—was playing out on a smaller stage.

The Morrissey of the group was a clan called Zhi. Zhi was the most influential power in the state by far. Flexing its vocal range, Zhi strong-armed its rival Jin clans for territory. It would be like Morrissey shaking down bandmates Johnny Marr, Andy Rourke and Mike Joyce for cash.

The first clan was known as Wei—the Johnny Marr of this scenario. Wei wanted to refuse, but reasoned that it would be wiser to give in Zhi the land and let the next clan fight it out.

The next clan was Han, to the South. Han reasoned that, since Wei had agreed to give Zhi land, it would seem like subterfuge if Han refused. So Han gave in, too.

The third little piggy was called Zhao, in the North. Unlike Wei and Han, when Zhi demanded land, Zhao said, “Come and take it.”

Zhi probably could have defeated Zhao on its own. But for good measure, Zhi allied with Wei and Han to attack Zhao in return for promises of a third of Zhao lands.

A River Runs Through It

The siege lasted two years, and it was brutal. Zhao didn’t stand a chance against the combined forces of Zhi, Wei, and Han. To make matters worse, Zhi diverted the river to go right through their city.

“The people were obliged to live in nestlike perches up above the water, and to hang their kettles from scaffoldings in order to cook.” (Han Fei)

After two years, the flooded capital was near starvation. Zhao was about to capitulate. They were deciding which of the three powers to surrender to when a minister named Zhang Mengtan offered a bold suggestion: How about we ask Wei and Han to switch sides?

Zhang Mengtan met with the rulers of Wei and Han, who were still a little peeved about Zhi’s annexation of their land. Zhang pointed out what they already knew: Once Zhao was out of the way, there was no telling which of the two would be Zhi’s next victim. Plus, why settle for a third of Zhao lands when you could get a third of Zhi?

Wei and Han agreed. One of Zhi’s ministers warned his ruler about the suspected defection. He noticed a change in demeanor of the leaders of Wei and Han. When they were on the verge of crushing Zhao, they looked on edge and nervous. At their next meeting with Zhi, they seemed smug and arrogant. Then, realizing they had given away their intentions, they became guarded. The leader of Zhi refused to listen to his minister’s warnings. “Now when the city is ready to fall at any moment,” he said, “What reason would they have for changing their minds?”

And then there were three…

The attack began when the new allies re-diverted the river to go right through Zhi’s troops. With Han and Wei conveniently located on either side of the Zhi army, they annihilated the confused soldiers, killed the leader of Zhi and captured his second-in-command. Wei, Han, and Zhao then split up Zhi’s former holdings three ways.

In that respect, it may be more like Genesis than the Smiths, with Phil Collins playing the part of Wei. Wei became the dominant member of the group when Peter Gabriel left, and many say their best days were still ahead of them.

Wei’s leader, Marquess Wen, (r. 446-396) made Wei the alpha of the “Three Jins” through clever strategy and by balancing Confucianism with a new theory known as Legalism. Wen had a minister named Li Kui. Li Kui introduced a system of rewards that emphasized usefulness to the state and created a standard code of laws (later The Book of Laws), ideas that would later influence Qin and help Qin to defeat its six competitors.

The Partition of Jin ended the Spring and Autumn Period and set the stage for the Warring States. Wei, Han, and Zhao would make up three of the seven States. Sandwiched between Qin to the West and Qi to the East, their lands will become the battleground for Chinese unification.