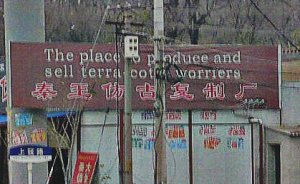 I do a double-take out the window as the shuttle zooms by a warehouse.

“The place to produce and sell terra-cotta worriers”

A warehouse full of statues of Jewish mothers, I imagine, fretting about their adult children gallivanting across East Asia. No time to investigate! Our shuttle van makes a bee line down the Lianhuo Highway and comes to a halt in a parking lot 23 miles east of Xi’an proper. The guide hustles us through the concrete plaza toward a squat airplane-hanger of a building with a rounded roof and in through the glass doors that form the entrance to Pit 3. It takes a moment for our eyes to adjust to the light, or lack thereof. When we do, we’re peering over the rail into the pit below at one of the greatest archeological discoveries of the 20th century.

In pre-planned funeral arrangements, some folks ask to be buried with a sentimental token, a ring or a piece of jewelry. Maybe a jersey of their football team. Qin Shi Huang, the First Emperor of China, wanted to be buried with his 8,000 finest warriors. 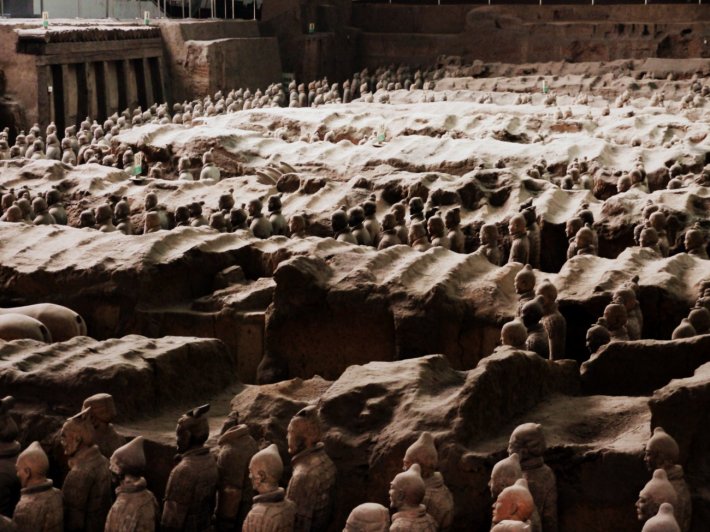 And who can blame him? They did wonders for him in this life. With his armies, Qin Shi Huang conquered the known civilized world, bringing together most of what we call China today. So why not in the Afterlife?

Murdering 8,000 guys to take with him to the afterlife would not have been a moral issue for a guy like Qin Shi Huang. Over a hundred times that many died building the Great Wall. But you can’t eat your cake and slaughter your warriors too, because, after all, someone has to stay home and defend your successor if your dynasty’s to last the foretold 10,000 generations. So instead, thousands of replicas were sculpted out of terra cotta, each one unique. 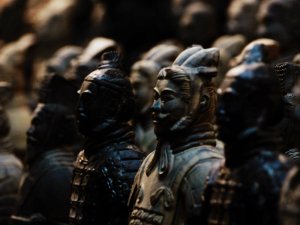 In 1974 a group of farmers struck the first terra-cotta head when digging for a well deep below the fields. Even before the terra-cotta warriors were discovered, rumors had circulated that this area was where the First Emperor was buried. But it’s hard to overstate how the tangible, physical evidence of the terra-cotta warriors rocked China. Much of what was known about the First Emperor came from the Shiji, written a century after his death over two-thousand years ago. And the stories about him—his power, his paranoia, and his grandiosity—sounded hyperbolic. It would be like discovering the actual palace of King Solomon, or another biblical figure surrounded by long-disputed bible stories, and learning that those fantastical stories weren’t just true…they were toned down.

As fate would have it, nearly three decades after the discovery, on the very day I visit the Terra-Cotta Warriors, the farmer who discovered them is sitting right there behind a desk autographing copies of the official book. He’ll even pose for a picture if you buy a copy. (But better not press that shutter if you don’t.) 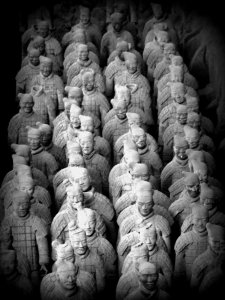 Word on the street is it may the same farmer sitting around the signing books all day every day for the past twenty-eight years. Some of the farmers died in abject poverty, at least one committed suicide by hanging. And their land was seized by the government. The word is that the present signer was a manager of a terra-cotta warrior replica factory when President Clinton visited and henceforth used a picture of himself shaking the President’s hand as proof he was somebody famous.

But having the discoverer on hand is good business and makes tourists happy. Plus, it shows that China takes care of its amateur archeologists. In retrospect, I’m disappointed Wang Yirong, former Director of the Imperial College, wasn’t hanging around the Anyang ruins waxing poetic about his Oracle Bones discovery… “It was a hazy autumnal morn in 1899, winds blowing from the southeast. The paper predicted mist…” It’s like those guys who hang out outside the Chinese Theater in Hollywood. He may not be the real Captain Jack Sparrow, but it makes for a cool photo op. 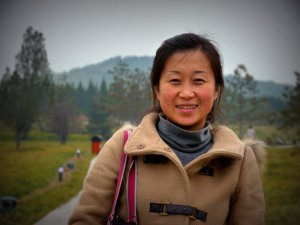 Our fearless guide in front of the Mausoleum mound

Not far from the terra-cotta pits is a site that dwarfs the warriors’ in size. From the path it looks like any ordinary hill or small mountain, except that it’s man-made. Buried underneath is the mausoleum of Qin Shi Huang. The legend says that the First Emperor’s burial site included a replica of the world he ruled, complete with rivers of mercury. The mausoleum mound hasn’t been excavated yet, but preliminary tests show unusually high traces of mercury emanating from the mound. Also found at the site, some of the finest bronze work in the world, including entire four-horsed chariots made of the stuff.

If it’s anything like the terra cotta warriors, truth could be grander than legend. The government is waiting for technology to catch up before excavating. There’s concern the pollution of the region will damage any artifacts exposed to the air. Then there’s also the fear of curses that tend to follow the opening of stuff like sacred burial chambers.

Going back to our Greek philosopher analogy, if the Zhou Dynasty was the Aristotle of Ancient China, then the First Emperor was Alexander the Great. Remember, Socrates taught Plato taught Aristotle, and Aristotle was Alexander’s tutor. 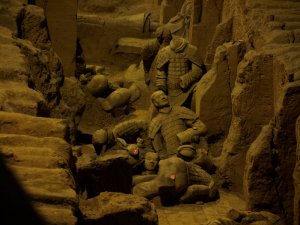 Both Qin Shi Huang and Alexander are remembered more for their conquests than their philosophies. And both their reigns, as impressive as they were for the amount of territory they brought under one flag, were brutal and short lived.

That’s where the analogy ends. The words “China” and “Chinese” come from Qin, which before Pinyin was spelled “Chin”. Were Alexander the Great to have an equivalent legacy, the entire region he conquered, from Italy to India, would still be known as Alexandria, and all the people within it (whom today would number over a billion) would be “Alexandrians”.

Twenty-some-odd centuries after their deaths, Alexandria refers only to a seaside city in Egypt, while Qin’s namesake is 1.3 billion strong. 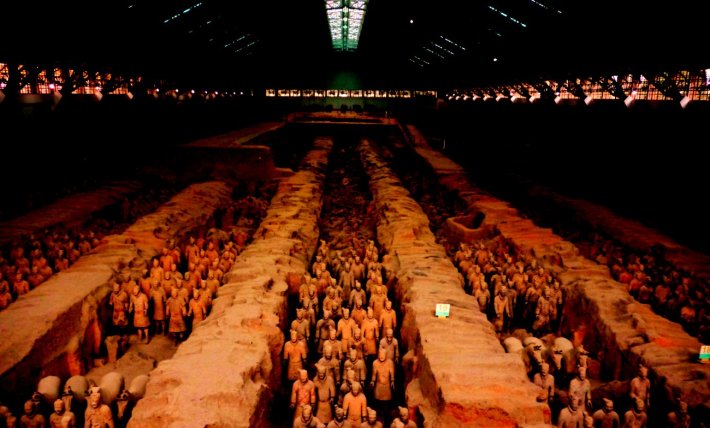 So this is how it ended. How did it begin?